Why spend a lot of money on a tripod head?

« get yourself a good tripod, you’ll never regret it. »

This is something we often read on forums and blog posts around the web. And it’s true: a good tripod will serve you well, for a long time. But in this article, instead of focusing on the tripod, I want to focus on the tripod HEAD.

In my opinion, getting a high-quality tripod head is even more important than getting a good tripod. While most tripods can hold steady in normal situations, a cheaper tripod head will have all sorts of flaws that will impact your work. I will present my own choice for a tripod head (the Vanguard ABH-120K), but keep in mind that I am not advocating one particular brand or model, but rather presenting the advantages of a high-quality product. 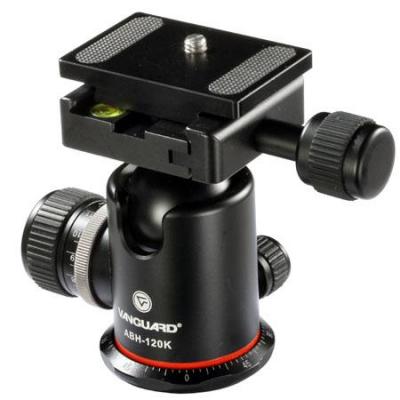 Why spend a lot of money on a tripod head?

There are numerous reasons, but the main one is that you want your head to just stay there. For macro shooters the worst thing that can happen (except maybe that annoying wind…) is to carefully frame your shot, lock the screw, remove your hand from the camera… and see the lens tip downward, ruining your composition. The same applies, to a lesser extent, to portraits, landscapes, or any other shooting situation. A good head will lock when you turn the screw, and stay firmly in place. It’s hard to emphasize enough how much this can become important, and how nice it is to simply trust your tripod head in all situations.

High-quality heads also have all sorts of perks that make working with them easier. They sometimes are made with elliptical balls (instead of spherical ones) to create a more uniform friction when you move the camera up or down. They almost always offer friction control so you can fine-tune the level of friction you want even when the lock is released. They usually offer an independent control for panning horizontally while preserving the lock on the ball. They also often bear much heavier weights than cheaper equivalents, which can become important with larger lenses (the head that came with my tripod could bear 8 pounds, the one I use now can bear 44 pounds…). When they have a bubble level, it’s safe to say that it’s more reliable than on the typical inexpensive head.

Many high-end tripod heads also use the ubiquitous arca-swiss plate system. This system has many perks: it allows easy locking-unlocking; it’s a nearly-universal standard which means any arca-swiss-styled plate will fit on any arca-swiss head. Lastly, this system can act as an emergency focus rail for fine-tuning focus, for instance when doing macro work.

I use the Vanguard ABH-120K and I’m happy with it. But whatever the brand choice you make, if you tend to work often with a tripod, do yourself a favour and select a high-quality head. It will serve you for a long time, and you’ll never regret it.

My First Pentax: The Spotmatic