My Love Affair with Pentax 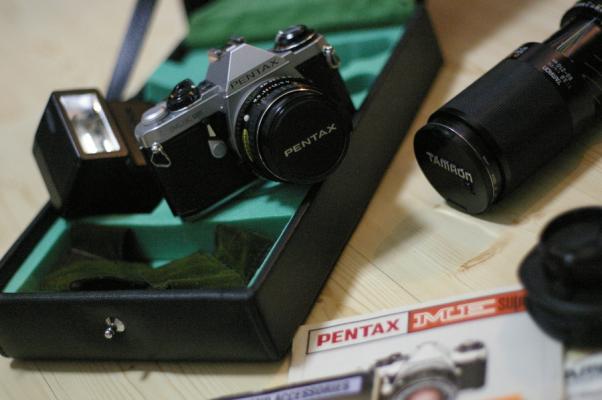 "You can take it if you want, I don't even use it anymore," was what my friend said one day when I spied his old Pentax DSLR collecting dust in his house. I had seen other people throughout my life use Pentax, but it was only then that I truly began my personal love affair with this venerable brand.

Over the course of the year, with the inheritance of my friend's old Pentax, I began to take pictures voraciously. Amazingly, to this day, I still don't possess a camera body of my own purchase, but my passion for photography grew and I started buying necessary peripherals to supplement the hand-me-down Pentax. In time, I bought an arsenal of memory cards, straps, eneloops, and other camera-related gadgets and gizmos, but I was still indecisive about which camera system to ultimately go with.

I live and work overseas in Shanghai, and only get to return home once a year during my annual leave. It wasn't until many months later while visiting my parents back in Toronto that I would cross paths with another Pentax again. I didn't know it at the time, but fate would have my infatuation with Pentax come full circle at my parent's home and turn it into a committed choice.

In his later years, my father is now a quiet man, content and at peace with his accomplishments and choices made. His tempered demeanor giving nothing away of his wild rock-and-roll days of riding motorcycles, having long hair, and playing electric guitar, (unbeknownst to my rebellious adolescent vows to never be like my "boring, fuddy-duddy" parents, I would end up doing all three of those things later on in my teenage years).

My father knew that I had become interested in photography during my time away, and one day proudly resurrected his old gear while I was visiting.

The old Pentax ME Super kit that he pulled out was in immaculate condition. Even the kit carrying case was unblemished and retained that indescribable, green velvety film smell that, to this day, I associate with photography. The manual itself, complete with cheesy illustrations and typewriter fonts, was lovingly preserved, and somehow reminded me of bell bottoms and old driving test exam booklets.

Along with a couple of M- primes and a Tamron tele, he showed me the ME Super. This was the camera I remembered from my childhood. As I held it in my hands, I recalled playing with the winding lever for hours as a kid. I never took any pictures because film was "expensive" to develop and we could only afford to take pictures that were sure to be keepers. How lucky we are these days with the advent of digital cameras, being able to take hundreds of photos in one session and never think twice!   The ME Super looked tiny in my hands. Funny, it seemed a lot more overwhelming when I was younger.

I casually asked my father when he bought the camera, to which he replied that it was sometime in Macau, before we had immigrated to Canada. I would have brushed off his response as a simple date in time, but I am older now, and appreciate much more the meaning behind words and things not spoken. I instantly understood that stage of his life and his motivations for purchasing a camera. I didn't press him further, but I understood: He had bought the camera when he found out he was going to be a father. I suddenly realized that the kit before me was older than I was. The mighty little Pentax ME Super was what my father had chosen to capture his hopes and dreams (and most likely, his fears) of starting a new family in a new land.

The fact that he had chosen Pentax and that I, through other means, had coincidentally come to use other Pentax gear was, for me, nothing short of providence. There comes a moment, early on, in every photographer's life to make a choice on what camera system to use. It isn't a choice to make lightly, since lenses from different brands cannot be interchanged. Sure, one can always use multiple brands, but that was never really financially realistic for me. At that stage of my photographic life I was still not committed to any brand and was keeping my options open. I had already spent countless nights on the internet, researching on various brands and which model would fit me perfectly. I borrowed and tried different types of camera brands from anyone I could. I had almost let myself believe that, if only I could find the right camera for me, my photography would blossom and my mastery of the craft would reveal itself.

Invariably, most new shooters would be tempted to choose between the "big two" brands. A tragedy that lulls the newbie from going against the mainstream grain and taking a shot at experimenting with a different brand.  "It's what the pros use," lulls them into a safe comfort: never daring to risk; never learning to dare the status quo.

But that's exactly what my dad did in his youth -- dare the status quo. He immigrated halfway around the world when almost all of his family chose to remain in Asia. He chose the hard path, and in his hand, throughout his life adventure, was the ME Super.

Back in my father's home, holding the very same Pentax ME Super, I knew in that moment, whatever technical criticisms one would have of Pentax cameras, it would be my choice as well, just as it was my father's before me. Such is what fate is, or love, perhaps? To choose something, knowing full well its disadvantages and despite the judgement of others, and still, irregardless, know in your heart that, "That's the one for me."

It's OK if Pentax isn't your choice of camera and you favor something else: everybody finds their own path when it comes to affairs of the heart. For me, I'm proud to carry my Pentax everywhere. I wouldn't have the passion to get out there and practice everyday if it was another brand.

I ended up taking the ME Super with me when I returned to work in Shanghai. For some reason, my father just knew that I would. And so, the little ME-Super-that-could journeyed back once again across the Pacific, back to (what is now) the same country as where it was purchased over 30 years ago, to once again serve another generation.

My dad's ME Super is older than me, and sometimes it feels like I was entrusted with a family heirloom of sorts. But in my more contemplative moments, I think my father knew what he was doing when he nonchalantly showed me his old camera that day. He had put his faith in the ME Super when he bought it over thirty years ago to make sure the precious moments of his youth were recorded. Now, thirty years later, he put his faith once again into his trusty little friend. He wasn't entrusting me with the camera: he was entrusting his cherished Pentax to take care of his son.

I suppose that's what photography means for me, to be able to grab those irreplaceable memories from the ether before they get passed by the wayside in the railroad of time. I don't think I would have come to this path of choice, if my father didn't buy this very Pentax ME Super over thirty years ago.