Some incidents in life might be trivial, but influence your decisions to such an extent they steer your life in certain direction. They have a huge impact on your life. One such moment changed the way I perceived photography. In introspect, I have always been in love with photography. It has always been my burning desire to be a very well known photographer and daydreaming about this hasn't ceased till this very moment. A Sony A 100 that I purchased way back in 2006 was surely my first serious attempt at photography. It still remains the most trusted tool that I own and whatever small work that I have done in this sphere is because of my purchase of that camera.

Honestly, for first two and a half years I seldom used the Sony A 100 for what it was designed to be used for, instead it was used as a point and shoot camera in major life events, and some Sunday mornings were spent checking various features that the camera had. This all changed the day I found a Pentax K1000 manual in a wooden chest that my Dad wanted me to clean. I was aware that my father owned this film camera and had used it a lot when I was a kid. I had seen it hanging in a camera bag in my dad's closet and I knew it was not in use. Out it came as I read the manual page by page.

It was not a very large manual and I finished reading it in one go. Starting from what each part was, to how to load a film, to DOF scale on lenses and how to read them and light meter etc. till the end where they gave the addresses of Pentax offices worldwide. The Sunday evening was spent reading about Pentax K1000 on  Wikipedia and understanding (read appreciating the fact that)  the respect that this fully manual camera had earned from users worldwide. 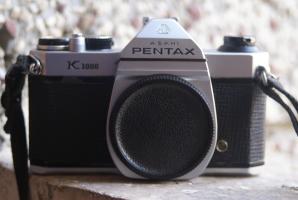 It surely was very enlightening to understand that Pentax K1000, being fully manual, required the photographer to "think" about the next frame, unlike click and view the image on the LCD letting the DSLR do all the "thinking " part. The more I read, the more interested I was to get one roll of film through it. I got the batteries and a Kodak Ultramax ISO 400 film roll from a nearby  shop.

Very carefully I loaded the film as per the instructions. To my disappointment unfortunately the light meter needle in the camera didn't move a single cm. I pointed it towards the wall and towards less well lit areas, but it was not moving. With very limited understanding of the aperture and shutter speed, I first took pictures using my Sony A100 and replicated the settings on the K1000. Here is the first ever photograph that I took on film: 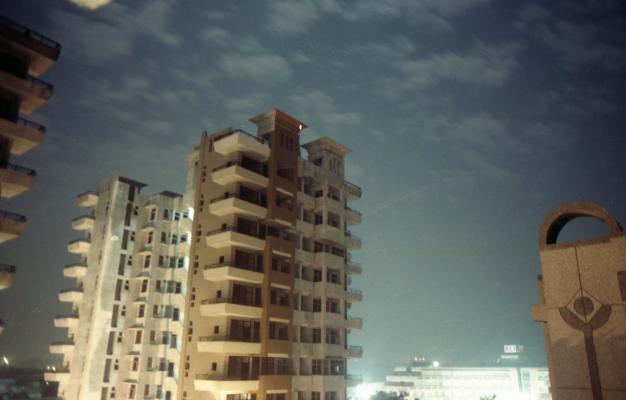 I learnt so many things about the camera, light, exposure (sunny 16) and composition  in coming weeks which I hadn't learned at all through my entire life. I wanted all the frames to be perfect. For the very first time, I was raring to go out and capture life on this very simple but amazing camera. No words can describe the excitement I felt when I got the film roll developed and got some 4 X 6 prints. It was a flop show of sorts hardly 10 frames had exposures that can be considered as "acceptable".

Nevertheless the wait and uncertainty of how the pictures would come out was simply worth it. The Pentax K1000 with its simplistic design and virtually no specifications to talk about makes it the best tool for a keen student of photography. Equipped with a 50mm kit lens, a film scanner and continuous supply of 35mm negative film, in my personal opinion any inquisitive student can learn the  fundamentals of photography without much assistance. It is the simple design itself that makes this camera so amazing. As the photographer needs to manually adjust all the settings, enough consideration can be given to how to creatively control the image and this pushes the photographer to think further on to composition.

It surely helps one develop on the skills that truly matter. Yes, the combo above can not be used in all types of photographic situations, but it will make the photographer understand the nuances of this artform. Moving to the K1000 led me to appreciate what A100 actually was. It helped me use the power of the DSLR to the fullest. The learner in me got hold of John Hedgecoe's "Guide to photography" which in turn helped me learn everything a little deeper and better. I attribute my being in love with photography to this amazing device and will never ever part with it. Today I have a special love for film and eventually have invested in more advanced Minolta Dynax 7 and two Dynax 9 bodies, but still the K1000 remains the camera that ignited my love for photography and film photography in particular and paved the path for a never ending journey of learning new things.

Some useful information about the Pentax K1000 is available on Wikipedia.

Here are some pictures I have taken using this camera. I might not be a gifted photographer, but this camera has ignited a passion for photography in me and surely has had major impact on me.

PS: The Pentax K1000 was in production for more than two decades making it a widely available camera second-hand. You can get a good deal on ebay.com, keh.com, and pentaxforums.com among others.  I have seen the prices sky rocketing in recent times owing to the popularity of this  "your first photography teacher" camera!!

Please visit www.pentaxforums.com, the webpage for one of the largest rendezvous of Pentax users and lovers.