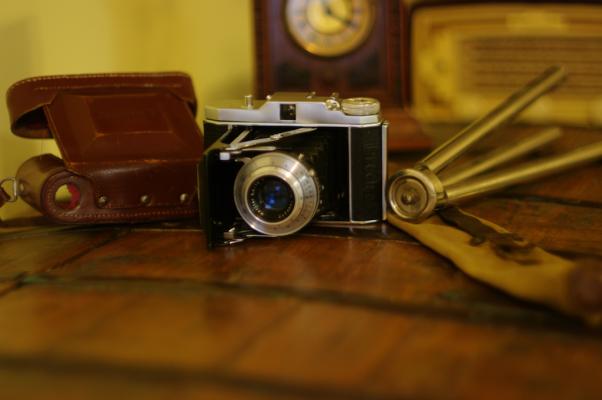 The piece of equipment that has been the most influential on my photography would have to be the first camera that my father gave to me. It was in the spring of 1968.

The camera in question was and still is fully functional in MF film format; it is a Precisa 2. I believe the full name is Beier Precisa 2 (made in Germany). This particular one was made somewhere in the mid-1950s. It is a Medium Format 6x6 camera with an E.Ludwig Meritar f3.5 / 75mm lens.

That was the camera, with which my father explained the principles of photography to me, and with which he let me practice. Eventually he gave it to me when I was 14 as I was leaving for a four day school excursion.

Giving me this camera was pretty extravagant of my father at that time and in that part of the world. I think that it was the happiest day in my first 14 years of life. This excursion (as it was already very special and exciting) become even more special. I was very proud of my camera, answering other's questions, explaining how it works and enjoying the attention of all the girls.

I was the only one to have that sort of camera and it was definitely a talking point for everyone. One of my friends took, without permission of his father, a Kiev camera . If I remember correctly it was a Kiev 4. I give him a crash education on how to use it.

Four days later his father introduced him to a different kind of crash education. His camera definitely was better, more advanced than mine, but it still was only 35mm, not medium format (though at that stage it wasn’t really important as I couldn’t afford to print anything bigger than 6X6 (1:1 ratio). I usually used 6X4.5cm).

The Kiev was maybe more modern but my camera still was the talking point and on top of that I did master it at age of 9, so I by the time I was 14 I knew how use it, how to compose photos and use this camera to its full potential.  For a short time I was the official class Photographer- aw yeah mama- I was a hero!

At that time I was the most advanced photographer at my school and the quality of my photos was definitely well above that of others, though to be honest, competition wasn’t very demanding and their equipment was usually inferior. I was the only one with MF camera against some very simple yet popular modern plastic 35mm East German, Russian and Polish point-and-shoot cameras. All the pictures of course were in black and white as colour film was very hard to get and was very expensive as well at that time and place, and on top of that I didn’t have any idea about colour development.

I should mention that all this was happening in late 60 early70 in Poland, then under communist rules, you know, the "very very bad: Iron Curtain and all that…I hope I’m not losing any points here.

Later on, I upgraded to a very expensive (at that time) Zenit E and forgot about my Presica for a while… well… maybe a bit longer then a while.

After I left Poland and was adopted by Australia, I had and still have 3 Pentax film cameras and K20D, all amazing equipment and have never regretted buying them.

Though I’m holding my Presica now and admiring it again. My childhood comes rushing back. Being a little cranky with myself, I can’t believe that I didn’t use it for so long. I wish I could post some photos taken with this camera but unfortunately I can’t. I will as soon as I do some research and buy good quality 6X6 and 35mm film scanner. I have to do it soon. I have hundreds of 35mm films and quite a few 120 films - some of which are in quite a distressed stage.

If I would have to lose any of my cameras I would be prepared to lose all of them but not this one, not the Presica. After all, as good as they are, I can replace them. But you cannot replace the memories.

That is my humble little story.

Above is photo of my Presica, taken in a bit of rush with EBC Fujinon 50mm f1.4 attached to the K20D.