The one piece of photographic equipment that has had the greatest effect on me is a lens that never actually existed.

A few years ago I was looking to buy my first digital SLR. I figured I should get some practice manually setting exposure before spending money on an expensive camera, so I asked my dad if he could dig up his old film SLR for me. He found his old Pentax-ME camera, with a 35mm f/3.5 lens attached to it. Then he told me that he had a really spectacular lens for it, a 50mm f/1.2 lens that he spent a small fortune on, I just needed to wait for him to find it. 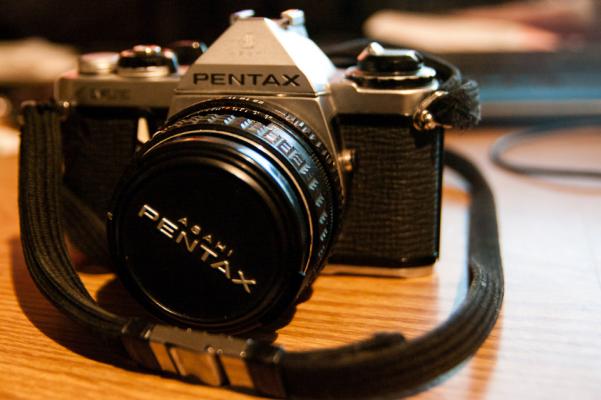 At the time I had a Canon point and shoot camera that I was pretty happy with, so I was considering buying a Canon SLR. Plus a few of my friends had Canon SLRs and lenses, so I could swap lenses with them. But when my dad told me about that 50mm f/1.2, I began to research Pentax cameras. I found that the lens was worth a good bit of money, and that it would actually work with current Pentax digital SLRs. So because of that lens my first digital SLR ended up being a Pentax K100D.

The thing is, that lens never really existed. My dad later found the lens he was talking about. It turned out to be a 50mm f/1.4: still a great lens, but probably not even a quarter of the cost of that 50mm f/1.2. I was a bit annoyed, but by then I had already bought my Pentax and a few lenses, so it was a bit late for me to turn back.

Since then I've come to love Pentax. I currently use a Pentax K20D. I love being outdoors, and I often get caught in the rain or snow. My Pentax K20D along with the DA* 16-50mm has been my constant companion through all the stormy weather. I especially like taking pictures of waterfalls, and with my weather sealed Pentax kit I have no problems walking right into a waterfall with my camera slung over my shoulder.

Durability of the Pentax K10D