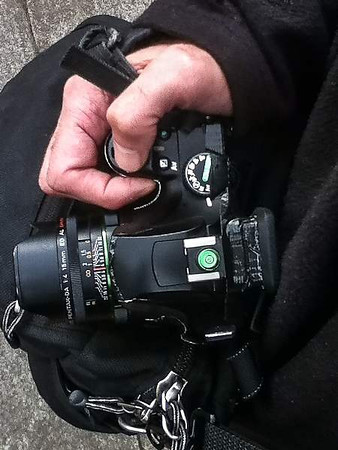 The Pentax SMC-DA 15mm f/4 ED AL Limited has transformed my photographic vision in expected and unexpected ways. I was certain it would be a great lens for landscape work; I was astonished when it revolutionized my street photography. Street photography with the DA 15 is the subject of this article; my second submission is about using the DA 15 for landscapes.

As an ultra-wide lens like the DA 15 makes everything smaller, it works best when you are close to your subjects. It is the ideal lens to use in crowded or narrow streets. For the K-x shots below I'm not using the optical finder or the Live View LCD. I am shooting blind--shooting from the hip as seen above. Walking through Istanbul's busy markets with my thumb on the shutter of the camera that casually rests atop the shoulder bag at my waist, I was ignored, and therefore, invisible. The inexpensive hot shoe bubble level installed above (that I got from Amazon) helped me learn to keep the camera level when shooting blind. 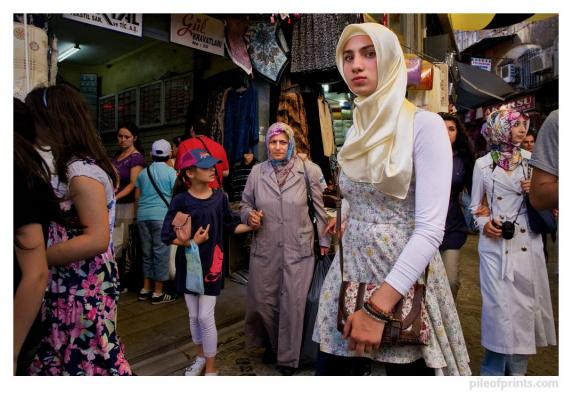 I started shooting from the hip in the bazaar district in Istanbul when I began a project about its interesting mix of Islamic tradition and Western fashion. In the background of this shot a mother wearing a traditional headscarf and full length body hiding overcoat (on a hot summer's day) holds her daughter's hand while she looks anxiously at the provocatively dressed woman in the foreground. It's tempting to believe you can read the mother's thoughts. Although the striking woman in the foreground is wearing tight jeans under her skirt, she is combining a fundamentalist headscarf with a miniskirt!

My featured street shots here were taken between f/5.6 and f/8 (Photozone.de recommends between f/8 and f/11 for best edge to edge sharpness and I try to follow that advice for architecture and landscape shots). As I'm often snapping the shutter while I'm walking, I set the ISO high to get a fast shutter speed. That first shot: iso 800, f 7.1 1/640 sec. 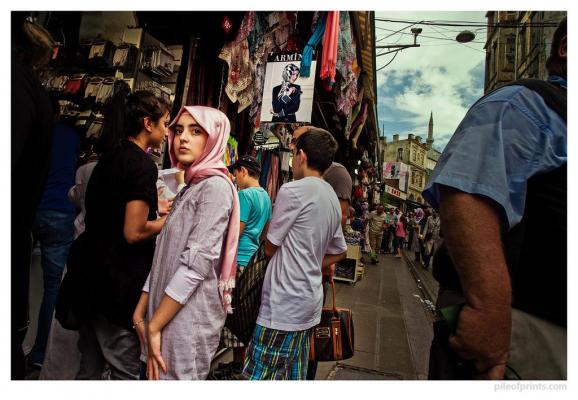 This second image is about the needful posture and distant expression of the woman in the foreground. It is about establishing a relationship between her and the Armine advertisement in the background that promises to provide all that is missing in a young female Islamic fundamentalist life. Photography is about such relationships and an ultra-wide lens like the DA 15 has more than any other lens helped me to reveal these connections in my pictures. What distinguishes the DA 15 from other ultra-wide lenses is its relatively small size. This makes it perfect for unobtrusive ultra wide street photography.

I have just released, "Buying", a new film that explains my shoot from the hip technique in greater detail and presents many more such shots. It was photographed on the streets of Istanbul almost entirely with Limited Lenses. Along with a discussion of Pentax street photography the film contrasts buying in traditional and modern markets. In the midst of all its revealing photographs of Turkish consumers it does not forget that the digital photographer is, himself, first a consumer. Here is the link to see the film for free:

How I use the DA 15 to for landscape photos is covered in my Make landscapes connect the Ansel Adams way submission to the other Pentax Forums 2,000,000th post celebration category.