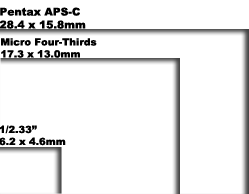 According to PhotoRumors, Pentax has indicated clear plans of releasing a mirrorless camera body within the coming months.  While specificactions on this body are not currently known, it is said to employ a 1/2.33" sensor, which means that this will not be a micro four-thirds camera.  Based on current sensors on the market, it's likely that the resolution of this sensor will fall between 12 and 14 megapixels.

Having already made its product announcements for Q2, we can only guess that this camera will become available during Q3 of this year. Stay tuned for further news!