Two new Pentax bodies to be released in late 2010 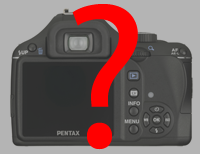 The Pentax K-5 will be the successor to the Pentax K-7, Pentax's current flagship model.  Although the K-5 will still employ an APS-C sensor, we expect this model to build upon the main shortcoming of the K-7: high-ISO performance.  With a maximum ISO of 25600 (4 times that of the K-7), the K-5 is bound to perform very well at lower ISOs such as 6400 or 3200, at which the K-7 had great difficulty producing usable photos.  If the K-5 will indeed launch with the current suggested price of $1600, it will not only become the most advanced digital SLR in its price class, but also a formidable rival for competing manufacturers.

The Pentax KR will succeed the Pentax K-x, which revolutionized the intro-level DSLR market back in 2009. The KR is expected to further extend the already-wide feature set of the K-x, with an improved frame rate among with added controls.  At $875, it will retain is place on the market as the most cost-effective intro-level DSLR.  Upon the launch of the KR, the K-x's price is expected to fall significantly, making it an even bigger steal!

You may discuss this news here: Pentax K-5 and KR rumor discussion.