A wide-angle zoom for the Pentax 645 digital system 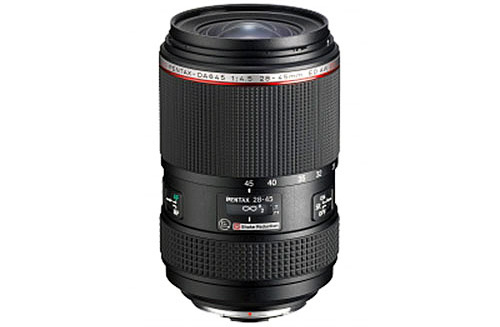 Rumors of a wide-angle zoom for the Pentax 645D/645Z have surfaced: a 28-45mm F4.5 lens, which will likely be officially known as the HD Pentax-DA645 28-45mm F4.5 ED AW SDM SR, will fill the gap between the 25mm and 55mm focal lengths in Pentax's lineup of digital-era medium-format lenses.  This lens will provide a diagonal field of view of roughly 90-62 degrees.

In addition to weather-sealing and SDM autofocus, the new 28-45mm lens will feature in-lens stabilization.  It will be the second stabilized lens for the 645D system, following the 90mm F2.8 macro.

This news, alongside with the rumored Pentax Q2, is starting to paint a picture of what we might expect to see at the upcoming Photokina trade show this September.  The only thing that remains a mystery is a new K-mount product, which we suspect will be a replacement for the entry-level Pentax K-50/K-500 cameras and perhaps a new lens from the roadmap.

Photokina, which takes place every other year in Germany, is one of the key expositions for the photo industry.  We will be providing first-hand coverage of the show as we did back in 2012.

You can read the original rumor (translated from Japanese) at digicame-info.