Two upcoming lenses for the K-mount and Q-mount 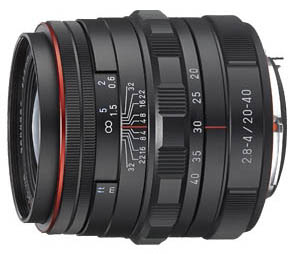 Last week, information about two upcoming Pentax lenses was leaked on the net.  The first is an elegant Pentax DSLR lens, the HD Pentax 20-40mm F2.8-4 Limited zoom.  The second is a the 08 Wide Zoom for the Pentax Q system.  Both lenses have been part of the Pentax lens roadmap since late 2012.  Let's start with the 20-40mm. 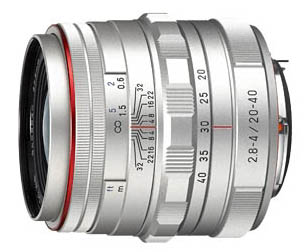 Like the existing HD Limited Lenses, the rumored 20-40mm zoom will be available in both black and silver.  Further specifications about this lens, including the AF system and presence of weather sealing, are not currently know.  What we do know is that the lens will feature Pentax's latest "HD" coating, which promises lower reflectance than the traditional SMC coating, similar to Nikon's "Nano Crystal Coat".  We also know that the lens will have a variable aperture range from F2.8 to 4: something unusual for a high-end lens, but to be expected if small size is a priority.

The design of this new lens is interesting, as it combines a retro-styled zoom ring with the barrel design of existing lenses.

The Pentax "Limited" lens designation is a misnomer.  Rather than meaning "limited production", Pentax actually uses this term to refer to its ultra-compact lineup of quality lenses.  These lenses are unique, as no other manufacturer has such a robust lineup of compact lenses.  The price you pay for this small size, of course, is that you lose a stop or two of maximum aperture compared to what you would get from a traditional lens.

Moving on, let's take a look at the new 08 Wide Zoom for the Pentax Q.  We actually do know the full specifications for this lens, as they were prematurely posted on the official Pentax web site (and perhaps this wasn't just an accident):

Based on these specs, this lens will provide a maximum field of view that's up to 15 degrees wider than that of the 5-15mm (02 Standard Zoom) kit lens.  It will also be about 21 grams lighter, even though its front filter thread has grown from 40.5 to 49mm.  What's a bit alarming is its aperture range of F3.7-4, which is very close to the point at which diffraction sets in on the Q and Q10.

Stay tuned to our homepage for the official announcement of these two lenses in the near future!