Prototype on display at Salon de la Photo in Paris

After its unofficial debut at PhotoPlus just weeks ago, a prototype of the upcoming Pentax full frame DSLR has once again made an appearance at Salon de la Photo, the annual camera expo that takes place in Paris.  Rumors of a tentative name for the camera surfaced at the show; the first Pentax full-frame DSLR may be named the Pentax K-1.

Among others, forum member Zygonyx attended the show and captured a clear view of the camera from the top: 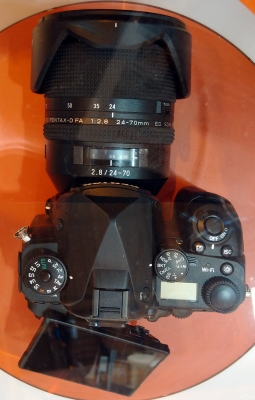 Whereas the camera was never officially mentioned at PhotoPlus, Ricoh Imaging France was not shy about sharing the news— and more photos— on facebook. 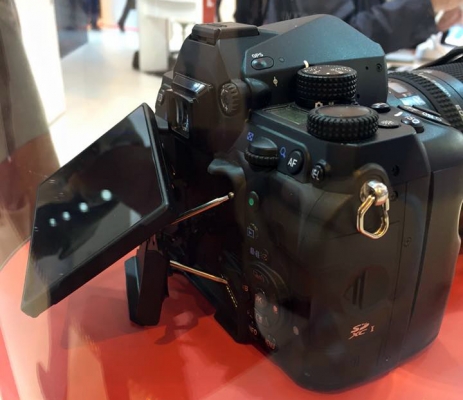 It looks like the Pentax K-1 will feature a new type of articulating display that will allow more a wider range of viewing angles than the traditional hinge.  In addition, a dedicated top dial has been added to facilitate easier access to key shooting settings.  Much of the remaining button layout is very similar to that of the Pentax K-3, which means that the K-1 will have a familiar feel for existing Pentax owners.

Based on what we've seen, we also know that the full frame will feature built-in GPS, Wi-Fi, and two SD card slots.  While the features and appearance of the camera are of course still subject to change, it is likely that the unit currently on display will be very similar to the production model.

The Pentax full frame is expected to make its official debut in the "Spring of 2016", though the exact launch date remains unknown.  We will be reporting from the CP+ show in Tokyo this February where it's quite possible that we will see the production body.

Follow more buzz on the forum and be sure to visit Zygonyx's flickr page where he will upload additional photos from the show.

Ricoh GR II on the Horizon