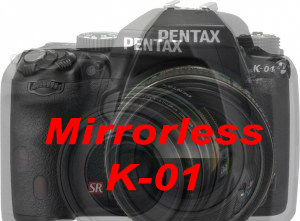 Pentax is slated to announce a new k-mount mirrorless body at the CP+ camera & photo show in Japan, according to the latest rumors leaked by a Japanese camera blog and other sources.  CP+ runs from February 9th, 2012 through February 12th; it starts in just three weeks!

The K-01 will be a mirrorless camera that uses the current K-mount lenses compatible with the Pentax DSLR lineup.  Judging be previous rumor trends, we believe this name is tentative.

The most exciting thing about this camera will without a doubt be the fact that it uses K-mount lenses, making it compatible with thousands of current and legacy lenses both by Pentax and other manufactures.

Judging by its size, this camera will be closer to a DSLR than a compact camera.  As it's rumored to be developed by Hoya, this means that it's been in the pipeline for a while and it will likely have a lot of components in common with the K-5.  It is also believed that alongside this camera, replacements for the current DSLRs (the K-r and K-5) from the pre-Ricoh era are being finalized.

Read more in the K-01 rumors thread on the forum.

We would like to close by mentioning that while no rumors of a full-frame Pentax DSLR have surfaced, if the Pentax full-frame facebook page receives 3000 likes by CP+, it will be brought to the attention of Pentax executives and at the CP+ show.