What's left on the shelves is all you'll ever see again 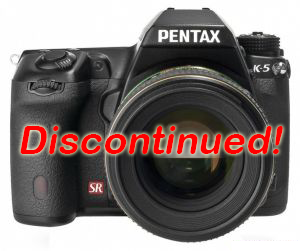 Originally introduced in October, 2010, the K-5 served as Pentax's flagship APS-C DSLR for nearly two years.  It was undoubtedly one of the most successful and one of the most-loved Pentax cameras of all time, but that's not to say that it was perfect. Upon the introduction of the mid-range Pentax K-30 DSLR this July, the K-5 started showing its age in many areas, despite being designed to be in a higher price class.

Photokina, one of the world's largest photographic trade shows, is coming up in about one month in Cologne, Germany.  We have no doubt that the K-5's successor will be announced there, and we simultaneously hope that this successor will build upon the strong points of the K-5 and improve on it where it was lacking, rather than being an entirely new camera (we will report on this live from the event next month). 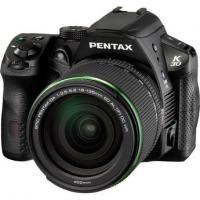 Even if a successor is announced soon, however, this discontinuation does mean that Pentax will be down to just one DSLR in its entire DSLR lineup for at least two months.  After discontinuing the K-r early this year, Pentax lost their intro-level body, and with the discontinuation of the K-5, they no longer have a high-end body, either.  This puts Pentax in a tough situation, and may even end up scaring away prospective users due to the dwindling camera selection.  It also means that Pentax has decided to keep each camera's production cycle relatively short, rather than following in the footsteps of other DSLR manufacturers, who keep many of their models on the market far longer.  For camera buyers, it will also be a shame that the great K-5 prices won't be around for much longer.

When Ricoh acquired Pentax last fall, they stated that they wanted to become a serious competitor in the DSLR industry.  Now, the company is under even more pressure than ever, as both Canon and Nikon are expected to release an intro-level (i.e. affordable) full-frame DSLR at Photokina.  If Pentax follows up with an APS-C body at the event and offers no full-frame DSLR in months to follow, they may lose all hope of entering the professional DSLR market.  Based on recent trends in the camera industry, it would hardly be surprising if the APS-C DSLR would start being phased out in favor of lineups consisting exclusively of full-frame bodies, with smaller sensors allocated instead for mirrorless and compact cameras.

We have received rumors which claimed that a Pentax full-frame body has been in development since the spring, but at this point these rumors are hardly reassuring, at least until the other gaps in the Pentax DSLR lineup are filled.  While we have no doubts that Pentax cameras will never go away, and that they their quality will remain excellent, we are still keeping our fingers crossed that the Pentax full-frame is around the corner to put Pentax back in the game...

In the mean time, if you're still in the market for a Pentax K-5, secure yours now before it's gone forever!

Pentax K-30 To Ship this Week In the US