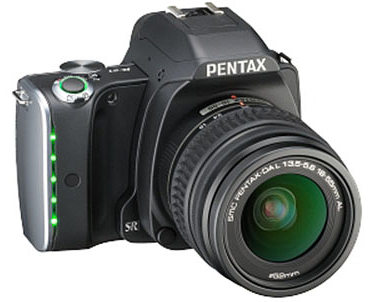 Rumors of an entry-level DSLR named the "Pentax K-S1" have recently surfaced on the Japanese news site Digicame-Info.

Based on the leaked photos, the K-S1 resembles a Sony NEX fused with a Pentax K-r mirror box and viewfinder.  Decorative lights and accents have been added in numerous places.

The K-S1 sports a new simplified button layout which no longer features the mode dial in its traditional location.  While further specifications are currently unknown, the camera's design implies a focus on light weight and small size.  Perhaps this camera will reclaim the title of the world's smallest DSLR!

We would expect the K-S1 to be priced similarly to the Pentax K-500, which may or may not see a successor itself in the coming months.