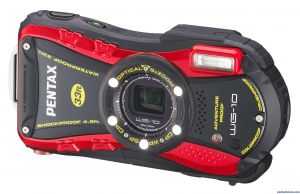 Recent forum posts suggest that we'll see two new waterproof Pentax point-and-shoots at the upcoming CP+ show in Toyko.  The Optio WG-10, pictured above, will be entering the market as an affordable outdoor compact camera; we expect it to be substantially cheaper than the new Optio WG-3, shown below, which be replacing the current Optio WG-2.

The WG-3 will be available with and without GPS, and it will feature better waterproofing than the WG-10.

The WG-10 is based on the design of the Optio WG-1 (originally launched in 2011) but will feature improved hardware and firmware features to bring it up to modern standards. 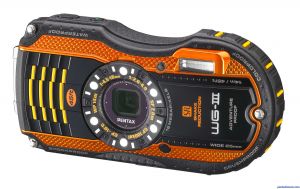 This is the first time that Pentax is launching two entirely different waterproof cameras side-by-side, something that we're very happy to be seeing, as it means that Pentax plans on further strengthening their image as an outdoor brand.  Furthermore, their two-camera lineup will now be able to more easily compete with other brands that also offer two waterproof compacts, such as Fuji or Nikon.

Enthusiasts, don't be alarmed: there's much more to be seen at CP+ than these two cameras.  Stay tuned to our homepage, as wel as our CP+ 2013 coverage page, for the latest in Pentax news and rumors!