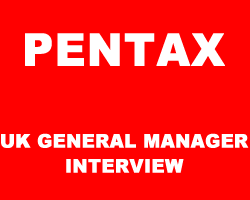 Another Pentax executive interview surfaces: ePhotoZine has recently spoken with Johnathan Martin, the General Manager of Pentax in the UK. You can read the entire conversation here.

As before with John Carlson, no concrete product news was mentioned in the interview, and all questions asking about future roadmaps were dodged. However, when asked about Pentax's future plans are, Martin says:

"2012 is going to be a very exciting year, and [news about a new mirrorless camera] is already out there, although we can't go into details. Also we will be looking to grow strongly in the Digital SLR market."

He then continues to allude to other manufacturers' lineups of 4 DSLRs (from entry-level to professional) but quickly proceeds to state that Pentax's product timeline is "unknown".

A year can't be exciting if all we see is stagnation, so we must assume that something big is on its away soon.

From the review, we can also conclude that:

It was also nice to see ePhotoZine mention our Full-Frame Pentax Facebook page, though Martin denied any rumors of a full-frame being developed.

Interview with John Carlson of Pentax