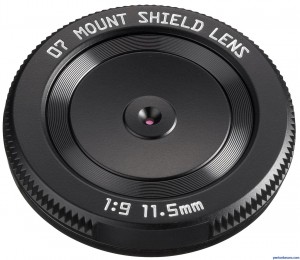 Together with the K-50, K-500, and Q7 cameras, Pentax Japan has also announced the body cap lens for the Pentax Q system.  We had been waiting for this lens for a long time, as a prototype was originally presented at the CP+ 2012 more than a year ago.  Officially (and quite boldly) named the "07 mount shield lens", it is the smallest lens that Pentax has ever made, being just 6.9mm thick.  It is not the first lens of its kind, however, as Olympus has had a 15mm F8 cap lens in its lineup for a while.

This unique lens works and feels like a standard body cap, except that it has one tiny piece of glass in the center that makes it work like a pinhole lens.

The 07 lens has a focal length of 11.5mm (equivalent to 53mm with the Q7 and 64mm with the Q/Q10) and a fixed aperture of F9.  Its focus is also fixed, but due to the wide depth of field, objects that are between 0.3 and 2 meters away will appear "sharp" at all times (this is known as pan focus).

Full specifications for this lens are available in our lens database.  Pentax has informed us that it will soon be available in the US, but an exact launch date or price is not yet known.  In Japan, it can already be pre-ordered for the equivalent of approximately $50.

New Cameras and Lenses From Pentax