An upcoming DSLR and three lenses

By PF Staff in Pentax Announcements on Jan 5, 2015

Ricoh Imaging will exhibit the full lineup of current Pentax and Ricoh photography products at the 2015 Consumer Electronics Show in Las Vegas, which will run from January 6th until the 9th.

In today's press release, the company announced that three new prototype Pentax lenses and one new DSLR will also be on display at the show.  Note that these prototypes are still subject to change prior to being released.

First and foremost, a new DSLR is coming!  This is hardly surprising, as Pentax needs a new model to replace the weather-sealed Pentax K-50.  Interestingly, the latter is not be on display at CES, which further solidifies our claim that this is the K-50's successor: 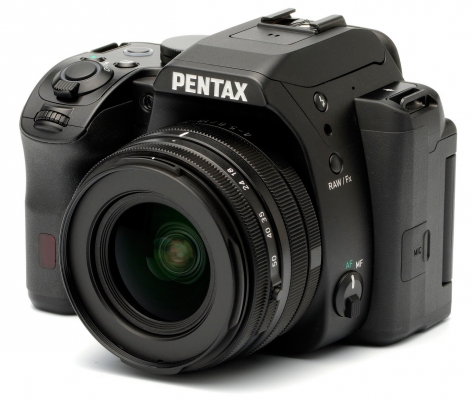 The only details that have been released about this camera is that has a 23.5 x 15.6mm APS-C sensor and that it is scheduled for launch in Spring, 2015.  Based on the sensor dimensions, we can infer that it uses the same 20.2-megapixel sensor that debuted in the Pentax K-S1 at the end of 2014.

By looking at the camera we can make a few other inferences.

Next up we have a collapsible 18-50mm kit lens.  The lens is mounted on the new DSLR in the photo above, and we can see that when collapsed, it's as small as a prime lens.  This lens is also scheduled for launch this Spring.

Finally, updated versions of the two big lenses that we originally saw at Photokina will be on display.  No new details about these lenses have been released, but we did receive some fresh product photos.  A firm release date has yet to be announced. Click on either thumbnail to enlarge:

Both lenses how have tripod mounts, and the high-magnification lens on the left seems to have become slimmer.  Per the latest lens roadmap, it would not be surprising if this lens had a zoom range of roughly 100-400mm.  The roadmap suggests a focal length of 70-200mm for the other lens, which made us speculate that a Pentax full-frame might be just around the corner.

It's interesting that no new compact cameras are being announced by Ricoh at CES, as this was the norm in prior years.  They may still be unveiled at the upcoming CP+ show in Tokyo, however, along with other products.

While we will not be present at CES 2015, we will post any new details about the products mentioned in this post as we learn them.  We will be covering CP+ live (Feb 12-15) and interviewing Pentax representatives on site.

RICOH IMAGING AMERICAS CORPORATION will be showcasing their full line up of cameras, lenses, and accessories at the Internationally renowned Consumer Electronics Show (CES), January 6-9, 2015 in Las Vegas, Nevada. Visit Ricoh Imaging, located at booth #13244 in the Central Hall of the Las Vegas Convention Center for an interactive exhibit and demonstration of all that Ricoh Imaging has to offer. As part of this year’s display, RICOH IMAGING COMPANY, LTD. is pleased to announce that it will exhibit four digital SLR camera products, as reference models during the show.

*Note: Model names, designs, specifications, and launch schedules are all tentative and subject to change without notice

In addition to the product under embargo, the Ricoh Imaging booth will be showcasing many of their award winning and quality products that both professionals and amateurs have come to expect.

PENTAX 645Z- Featuring an amazing 51.4 megapixels on a high-performance CMOS image sensor, the PENTAX 645Z assures super-high-resolution images with a stunningly realistic sense of depth combined with vivid colors and rich shadow detail. The resulting images feature a uniquely distinct look and an unmistakable brilliance that clearly differentiate professional photographers to their clients. The inclusion of a CMOS image sensor enables live view on a tiltable LCD panel while also making the 645Z the first and only camera in the medium-format category to offer video recording capabilities.

PENTAX K-3- With unparalleled technology and specifications, the award winning PENTAX K-3 provides a standard of imaging performance and unsurpassed user-flexibility. The K-3 touts 24 mega-pixels in an APS-C sensor, continuous shooting at an incredible 8.3 frames per second, and the world’s first selectable anti-aliasing filter, providing the user with the ability to easily turn on or off the anti aliasing-functionality.

PENTAX K-S1-  Building on the many technologies benchmarked in the company’s popular K-3 advanced DSLR, the K-S1 incorporates a newly designed 20 megapixel image sensor, super-high sensitivity ISO 51200.  In addition, this model contains in-body shake reduction, an AA filter simulator, 100% field of view glass pentaprism viewfinder, and 5.4 frames per second shooting at a fast 1/6000 shutter speed. Adding to the user experience is the camera’s unique flat field user interface, which integrates a back-lit LED selection dial, four-way navigation, and a bright 3” 921,000 dot LCD that breaks the tradition of the knobs and buttons found on traditional DSLR cameras.

Ricoh THETA- The Ricoh Theta is world’s first fully 360-degree, spherical imaging device which allows users to capture everything around them in the ultimate “selfie”. The newest THETA comes complete with video capability and amazing new body colors to capture the imagination.  The new THETA is an innovative leap toward changing the world of digital imaging and creating new ways to share the magic of photography with family and friends.

PENTAX Q-S1- The PENTAX Q-S1 is the latest addition to the popular PENTAX Q series of compact-sized, interchangeable-lens digital cameras. The camera is equipped with a wide range of features to make photography more enjoyable, including a 12.4 megapixel, back-illuminated CMOS image sensor to deliver high-quality images, high-sensitivity shooting to a top sensitivity of ISO 12800, and a reliable shake-reduction system using a state-of-the-art gyro sensor. It also provides a variety of creative tools to add the desired filters with just a simple turn of a dial. The PENTAX Q-S1 creates more personalized, creative images easily and beautifully. There are four standard color combinations and an additional 36 body and grip colors taken straight from the runway, such as gold, khaki green, and charcoal black that can be ordered through the color to order service. The PENTAX-01 STANDARD PRIME lens color can also be chosen from five different options to make the entire imaging system even more desirable and eye-catching.

WG-30w- Building on the heritage of the amazing adventure proof cameras in the WG series, the WG-30W comes equipped with built-in Wi-Fi connectivity and advanced smartphone support functions so one can easily browse through and download their adventures to share with family and friends. Designed to capture outdoor activities effortlessly, the WG-30W has a durable construction and a variety of outstanding features that make it ideal for those with an active lifestyle. In keeping with the tradition of the WG line, this new addition is lightweight and compact, yet tough enough to perform under a variety of outdoor conditions. The solid, airtight body is not only waterproof to an impressive depth of approximately 40 feet, but also shockproof from a height of 5 feet, crushproof against weights up to 220 pounds, and coldproof to temperatures as frigid as -10 degrees C.