By PF Staff in Pentax Announcements on Feb 8, 2011 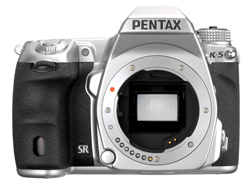 Priced at a resonable $1699.95, this new K-5 features a redesigned grip as well as reinforced top and rear LCD panels.  Its silver finish is more "metallic" than that of the silver K-7, and is arguably nicer overall due to the coloring of additional elements that were left unchanged in the limited K-7.

Pentax has not indicated whether or not this limited K-5 will be sold exclusively by the Pentax US webstore, but an estimated launch date of April, 2011 has been posted.  Pricing of the silver DA lenses is yet to be announced.