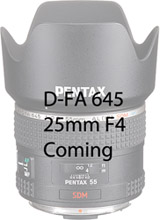 In his recent interview with the Online Photographer, Ned Bunnell hinted at the forthcoming release of a D-FA 25mm F4 lens for the 645D.  While complete specs for the lens haven't been leaked, we expect this lens to feature SDM as well as weather sealing, just like the current 55mm F2.8 lens.  The 25mm will only support the cropped sensor on the 645D, and as such, it won't be usable on the fiml 645 bodies.

Its field of view will correspond that of a 33mm lens on the 645 film system, or a 14mm lens on the Pentax APS-C DSLRs (about 92 degrees diagonally).

More specs on this lens will be posted as we receive more information.  Stay tuned!