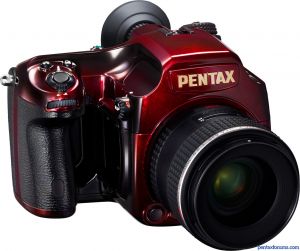 The Pentax 645D medium-format DSLR was recently selected as Camera Grand Prix Japan "Camera of the Year", an honor which it now shares with the K10D, which won the same award in 2007.

In order to commemorate, Pentax has announced a limited-edition version of the 645D with an "elegant, laquer-finished body," gold lettering, and special box.  Below is a complete list of features of the limited body:

The camera will be built-to-order, and will soon become available for pre-order on Pentax's web store.  Pentax states that each order will be fulfilled after approximately 4 months.  As such, the total number of units produced will likely be lower than previous limited bodies (with 1,000 copies each).  Each unit will cost approximately $15,000 (50% more than the normal body).

With this announcement, every high-end Pentax DSLR since 2006 has had either a limited silver or a Grand Prix version.  See below for the complete gallery of Pentax limited DSLRs:

Discuss this on the forum

Pentax to be sold to Ricoh