Pentax 645D to become available in the US

Pentax has announced global availablility of the 645D 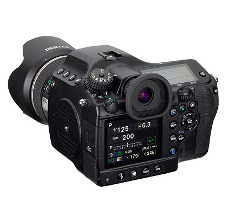 At this year's Photokina event, Pentax officially announced that the 645D medium-format digital camera will be made available globally (in both the US and theUK) later this year.

The Pentax 645D was announced earlier this year, but only for the Japanese market.  It is a professional-grade camera built to deliver the best possible image quality.  It features a large 44x33mm, 40-megapixel sensor that is approximately 1.7 times the size of a full-frame 35mm sensor.

Please follow the link above to view further 645D specifications.