By PF Staff in Pentax Announcements on Oct 1, 2015

Exactly ten years have passed since the launch of the original Ricoh GR Digital back in October, 2005.  To commemorate this, Ricoh Imaging has announced a special anniversary edition of the latest model in the series, the Ricoh GR II. 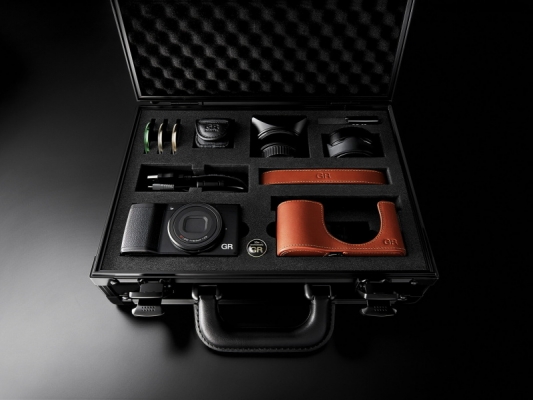 The Ricoh GR II Premium Kit (pictured above) consists of the following items:

With the exception of the decorative rings, the GR II included in this kit is identical to the standard model.  A genuine leather case and strap sets it apart from the crowd, however.

The Ricoh GR II is the sixth-generation camera in the GR family.  It was originally launched in June of 2015.  It is identical to the fifth-generation Ricoh GR save for the addition of Wi-Fi and other minor software enhancements.  It features the tried-and-tested 16-megapixel filterless APS-C sensor from the Pentax K-5 IIs and a high-performance 18mm F2.8 lens helps ensure high-quality images.

Learn more about the camera in our Ricoh GR in-depth review.

Since the launch of the fifth-generation Ricoh GR back in 2013, the GR line has gained quite a following for delivering professional-grade image quality in a light, pocketable form factor.  The GR cameras thus fill a unique niche in the compact digital camera market and they are currently the only high-end compacts offered by Ricoh or Pentax.  Unfortunately, many of our members are reluctant to try the GR due to its Ricoh branding— yet the latest GR features a number of Pentax-developed features, such as TAv mode.

The GR II Premium Kit will be limited to 1200 pieces worldwide.  US pricing and availability is currently unknown.  As of October, 2015, the normal GR II is available for $599 (reg. $699) at retailers in the US. Many of the accessories in the Premium Kit are also available for purchase separately.

RICOH IMAGING COMPANY, LTD. is pleased to announce the launch of the GR II Premium Kit, in commemoration of the 10th anniversary of the first digital version of the top-of-the-line GR compact camera. The special package features a selection of exclusive items including an aluminum trunk case, a camera case and a commemorative pin badge. It will be marketed in the limited quantity of 1,200 units worldwide.

*The specifications of the camera body are identical to those of the GR II standard model.