The K-01 is unfortunately out of production 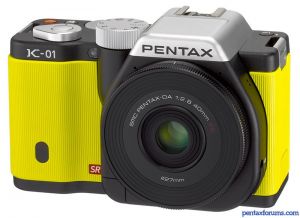 We learned at CP+ that the Pentax K-01 would soon be discontinued, and it is now officially listed as a discontinued model on Pentax's Japan web site.  During our Photokina interview Pentax suggested that the K-01 had not been selling as well as they had hoped, and that there was also no real demand for mirrorless-only Pentax K-mount lenses.

Thus, at least for now, we believe that we are not going to see a K-01 successor.  However, it could be the case that Pentax will instead be focusing on enthusiast point-and-shoot cameras such as the MX-1, which are becoming increasingly popular in the camera market.

Despite its discontinuation, the K-01 is still an exceptional performer when it comes to image quality and video, especially given its sale pricetag of $299.  After the price dropped, there was of course a spike in sales, so it's a shame that the camera is going to be gone soon.  At this price, the K-01 may well be one of the best camera deals out there at the moment. If you want to learn more about the K-01, don't miss our in-depth K-01 review!

If you're interested in the K-01, stock at B&H and Adorama is slowly running out, so don't wait until it's too late!  Both stores have recently received new shipments of all K-01 bodies and kits, so if you want one at the sale price, now is the time:

If you have any questions about the Pentax K-01, please visit our K-01 forum!