Hands-on with the Pentax K-3

Question-and-answer session with Pentax in Japan

On Friday we were invited to the Pentax headquarters in Tokyo for a hands-on tour of the new Pentax K-3 as well as a Q&A session with Ricoh Imaging (Pentax) executives, including Mr. Kawauchi, whom we also interviewed earlier this year at CP+.

The K-3 body that we were shown was still a pre-production model.  Although it was fully-functional and able to take pictures, we were asked not to comment on its performance or image quality.  According to Pentax, the first K-3 units will go on sale in Japan as early as October 25th, so be sure to check back at that time for our first impressions of the camera. B&H photo has informed us that it expects to receive its first K-3 shipment in approximately three weeks, so all K-3 pre-orders should go out around that time.

Without further ado, where is what we learned from Pentax Japan:

Q: Who is the manufacturer of the K-3's 24-megapixel CMOS sensor?

Q: Will production K-3's have the Ricoh logo on the back side?

A: Yes. While some pre-production K-3's still had the Pentax logo, the final version of the K-3 will feature the Ricoh logo.

Q: Has the performance of the Shake Reduction system in the K-3 been improved?

A: Yes. Pentax expects the mechanism to compensate for up to 3.5 stops of camera shake, or half a stop more than previous generations (on average).

Q: Has the bounce flash overexposure issue that plagued the K-7 and K-5 been fixed in the K-3?

A:  Since the K-3 features a new metering system, Pentax is not aware of any overexposure problems with P-TTL flash and the K-3. We believe this issue was originally caused by a hardware problem.

A: Yes, and it can take advantage of the increased writing speed.

Q: Does it support USB3?

As we were able to spend quite a bit of time playing with the K-3, also evaluated its ergonomics and compared it to the K-5 II.  Since the K-3's outer body is finalized, we will soon be bringing you a video with more details about the handling.  In the mean time, here are our first impressions:

While the K-3 originally seemed noticeably bigger and about 10% heavier on paper, in real life it is surprisingly similar to the K-5 II.  It doesn't even feel heavier in your hands.

In fact, it's hard to tell the two cameras apart at a distance.  This means that the K-5 II's great handling is basically being carried over to the K-3, with a few minor tweaks made here and there.

Apart from the updated control layout and and different LCD screens, not much sets the two bodies apart

The main improvement that we've noticed so far is the design of the main the grip.  Its shape has been modified slightly so that it's easier to wrap your fingers around it, and this makes the K-3 extremely comfortable to hold.  The K-3's grip is slightly deeper and wider than that of the K-5 II, as can be seen in this thread on our forum. 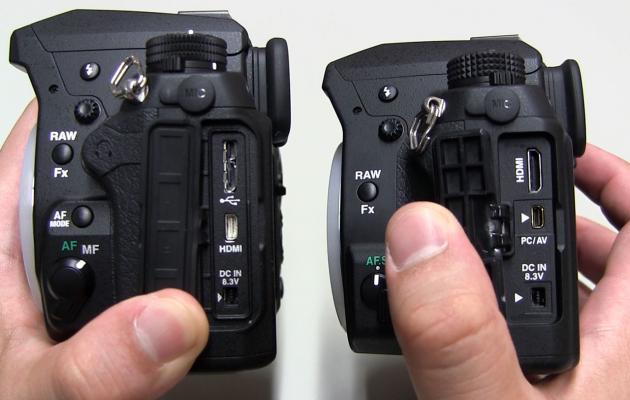 On the left side of the K-3 you'll notice that both the HDMI and USB connectors will require different cables than the K-5 II, but the same power supply can continue being used.  In addition, both cameras share the same D-LI90 battery.  On the right side, the K-3 of course has an extra SD slot compared to its predecessor, but is otherwise very similar.

Now that we've had a chance to take a closer look at the K-3, we are even more excited to get our hands on a production model, and we are sure that you are too!  Stay tuned for our video overview of the K-3's handling and ergonomics next week.

For more details about the Pentax K-3, please visit the detailed preview that we posted earlier this week.  If you would like to be among the first to get a K-3, don't forget to get your pre-order in at B&H!