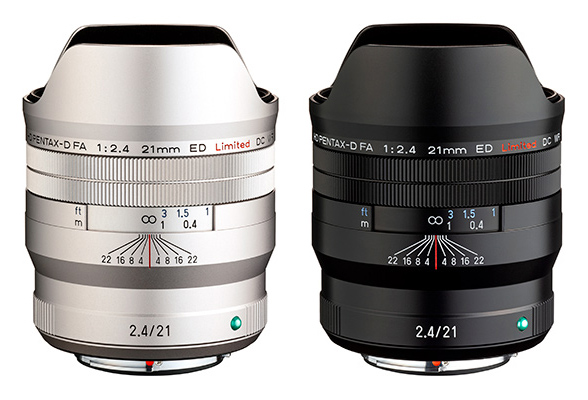 Ricoh has just released the HD Pentax-D FA 21mm F2.4 ED Limited ultra-wide angle lens which has been on display in the past as a prototype.

We have seen no press release yet on this new lens, but detailed product information is available at Ricoh's Pentax web site here. We have also incorporated the specifications into our database.

This new 21mm F2.4 Limited is the first full-frame Limited lens featuring a built-in silent autofocus motor and weather sealing. It is a premium ultra-wide lens with metal finish in the style of the FA Limited lenses and with an emphasis on top-notch optical performance. The aperture mechanism is controlled electronically (KAF4 mount)*.

At 21mm this lens is a nice supplement to the FA limited lenses and to a walk-around zoom like the D FA 28-105mm zoom.

Its optics incorporates four ED (Extra-low Dispersion) and one Super ED (Extra-low Dispersion) glass optical elements. Ricoh states that this will minimize chromatic aberration and prevent color bleeding, not only in the main in-focus area, but also in the surrounding defocused areas. It also features a large-aperture negative meniscus optical element, a biconvex aspherical glass-mold optical element, and a high-refraction glass optical element in the first lens group, to reduce overall size despite its ultra-wide-angle design. RICOH claims that this lens will deliver outstanding imaging performance for sharp, crisp images without any fuzziness, even in peripheral areas. Stay tuned for our upcoming test of the D FA 21mm lens which will look into these claims. 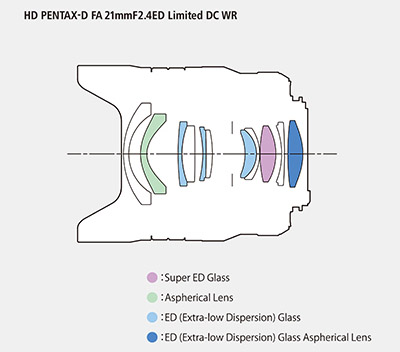 The lens is available in silver as well as black finish.

*Cameras compatible with the KAF4 mount are the Pentax K-50 and newer. For K-1, K-3 II, K-3, K-S2, K-S1 and K-50, the camera’s firmware must be upgraded to the latest version. If this lens is mounted on a camera without the proper firmware upgrade, its diaphragm control mechanism becomes inactive leaving the aperture fixed at F2.4.  Visit our compatibility checker for more details.

Update: a press release was officially published on October 14th.

RICOH IMAGING COMPANY, LTD. is pleased to announce the launch of the HD PENTAX-D FA 21mm F2.4ED Limited DC WR. Designed for use with PENTAX K-mounted full-frame digital SLR cameras, this ultra-wide-angle single-focus lens is the newest model of the PENTAX Limited series of lenses, highly acclaimed for their distinctive image rendition and superb exterior design.

Developed as the latest model of the PENTAX Limited series -- renowned for their meticulous attention to every detail, from distinctive image rendition to distinctive appearance with the machined aluminum lens barrel -- this ultra-wide-angle lens covers the image circle of 35mm full-frame digital SLR cameras. In the PENTAX Limited lineup, it is also the first D FA-series lens designed to optimize the visual characteristics of digital images. This is part of PENTAX's attempt to reach a level of imaging performance that can't be measured simply in numerical values. It captures the prevailing ambience and true-to-life sense of depth of the scene, and makes photography enjoyable for its users -- essential elements of the PENTAX Limited series. The 21mm ultra-wide-angle focal length, not previously available in the FA Limited series, adds a new perspective of visual expression for the Limited series.