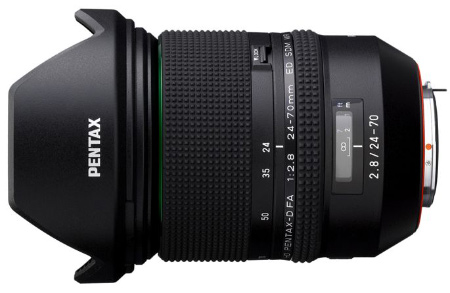 Pentax's suite of dedicated full-frame lenses grows with today's announcement of the HD Pentax-D FA 24-70mm F2.8 ED SDM WR, a fast weather-sealed standard zoom.  Covering focal lengths from wide angle to long normal, the 24-70mm will be the go-to premium walkaround lens for the upcoming full frame.  While not developed for use with APS-C bodies, the lens is of course fully compatible with existing K-mount cameras and would offer a field of view ranging from wide normal to short telephoto.

The new lens comes packed with Pentax's latest technologies, including HD coating, SDM autofocus, quick shift manual focus override, and weather sealing.  From a cosmetic point of view, the 24-70mm is styled similarly to the 150-450mm and 70-200mm zooms with a minimalistic barrel.  It has a front-mounted zoom ring and a smaller focusing ring directly behind it, along with a distance scale.

Per the latest Pentax lens roadmap, two more full-frame zooms a planned in the near future: a longer standard zoom such as a 28-105mm, and a wide-angle zoom such as a 15-30mm.  This will bring the number of current D FA (FF-compatible) lenses to at least 7, one of which will inevitably be used as a kit lens.

This announcement could be an indication of a continued behind-the-scenes partnership between Ricoh Imaging and Tamron.  The newly-announced Pentax 24-70mm bears a stark resemblance to the existing Tamron 24-70mm, not only from a physical point of view, but also in terms of optical and mechanical specifications.  Like the Pentax lens, the Tamron (available for Canon and Nikon) is weather-sealed and has 17 elements in 12 groups.

In the existing Pentax lens lineup, the DA 18-270mm is essentially a rebadged Tamron lens.  The superzoom cooperation with Tamron dates back to the late film era with lenses such as the DA 18-250mm and FA 28-105mm F4-5.6.

See below for a physical comparison of the Pentax and Tamron 24-70mm lenses: 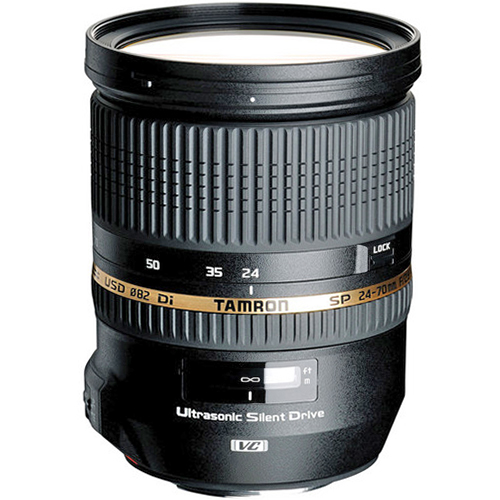 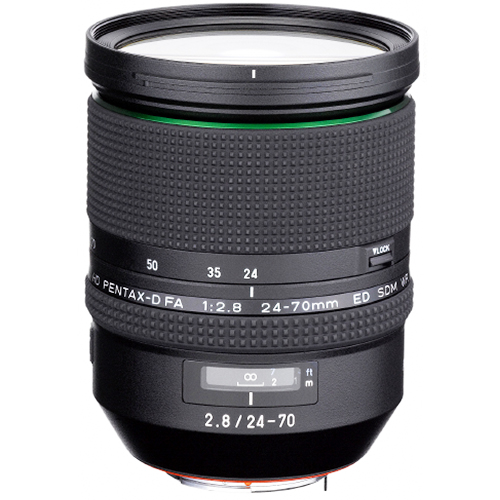 Below are the official specifications for the 24-70mm lens.

Some (purely speculative) rumors claim that the Pentax full frame will not feature screwdrive autofocus.  We believe that the camera will have an AF motor in order to support existing FA and D FA lenses with screwdrive.  Furthermore, since the 24-70mm is based on an SDM-only Tamron lens, the release of this lens cannot be used as evidence against the presence of screwdrive AF in the upcoming camera.

1. Exceptional imaging power
Consisting of 17 elements in 12 groups, the newly designed optics feature three ED (Extra-low Dispersion) optical elements, one anomalous-dispersion-glass aspherical optical element and three aspherical optical elements to accommodate super-high-resolution image sensors. By assuring sufficient light levels even at the edges of the image field and compensating various aberrations to a minimum, it provides a high MTF (Modulation Transfer Function) and delivers well-illustrated, fine-detailed images that are rich in contrast and resolution across the entire image field. When mounted on a current PENTAX K-series camera body, it uses only the central area of the image circle so that it delivers high-resolution images with uniform image description over the entire image field.

2. Large-aperture standard zoom lens
When mounted on a 35mm-format full-frame digital SLR camera body, this zoom lens offers a zoom ratio of approximately 2.9 times to cover the ultra-wide-angle to standard ranges (24mm to 70mm in focal length). It provides a maximum aperture of F2.8 over the entire zoom range to deliver brilliant images. It not only covers the focal-length range most frequently used for ordinary subjects, but also provides ultra-wide-angle coverage to produce distinctive visual expressions, such as exaggerated perspectives or extra-wide depths of field, making it very useful with subjects such as sweeping landscapes and shallow indoor scenes. When mounted on a current K-series digital SLR camera body, it provides focal lengths from 37mm to 107mm in the 35mm format to cover wide-angle to medium-telephoto ranges. Since its large maximum aperture not only creates an excellent bokeh (defocus) effect on the background for beautiful portraits, but also allows the photographer to handhold the camera for poorly illuminated subjects, such as sunsets and indoor scenes.

7. Other features
・Rounded diaphragm to produce a smooth, beautiful bokeh (defocus) effect, while minimizing the streaking effect of point light sources.
・Zoom lock lever to prevent the accidental extension of the lens barrel when pointed downwards.

Note: Designs and specifications are subject to change without notice

Will you be getting this lens along with the full frame?  Share your thoughts in the comments below.