Ricoh Imaging has unveiled a prototype D FA★ 50mm F1.4 lens, previously roadmapped as the "wide-aperture standard" prime.  This lens will be on display at CP+ 2017, which kicks off on Thursday at the usual location near Tokyo.  We will be interviewing Ricoh Imaging representatives at the show.

The new D FA★ 50mm is slated to replace the 25-year-old FA 50mm F1.4.  Unlike its predecessor, it prioritizes image quality over compactness, and thus reminds us of the acclaimed Sigma 50mm F1.4 "Art" which was not produced in the Pentax mount. 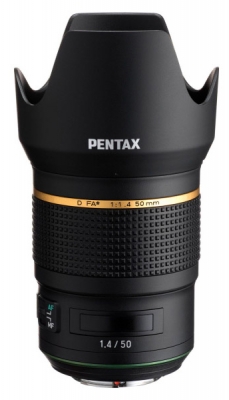 Only a few concrete details have been revealed about this lens:

Based on the mock-up photo, though, we can see that the lens will feature silent autofocus— most likely DC, as SDM has seemingly been retired in new Pentax designs.  As a premium star-series lens, we can also expect it to have weather sealing (All Weather), the HD coating, and full time manual focus override (Quick Shift) just like the existing lenses.

Four other full-frame lenses are currently roadmapped.  For reference, we provide last year's road map below: 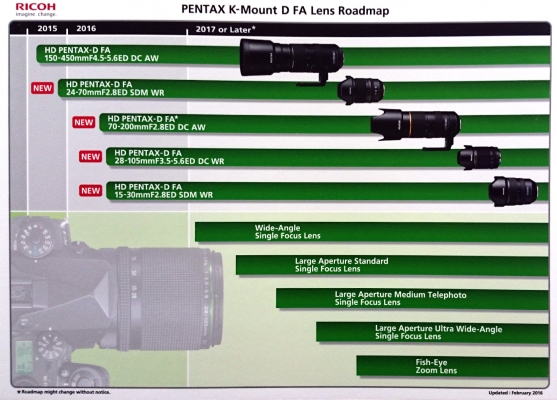 It's likely that we will see an updated roadmap at this year's CP+ show.