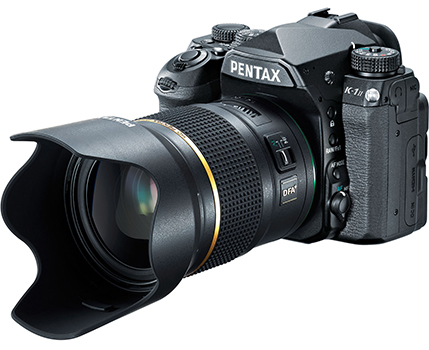 Ricoh Imaging has finally officially announced the HD Pentax-D FA★ 50mm F1.4 SDM AW, a premium prime lens designed to deliver the highest levels of image quality when paired with a full frame camera body such as the Pentax K-1 and K-1 Mark II.  As a star-series lens, the new 50mm sports the latest in technology, including an electromagnetic aperture diaphragm and a newly-designed ring-type focusing motor.

This 50mm follows in the footsteps of Sigma, Zeiss, and other manufacturers who have recently started making wide-aperture primes optimized for image quality above all else.  In fact, the D FA★ is both over 4 times heavier and over 4 times more expensive than the film-era FA 50mm F1.4.

We originally learned about this lens last February, and we went hands-on with it in March and this year's CP+ show in Tokyo.  We are looking forward to conducting our in-depth review once the production version of the lens becomes available.

Full specifications are available in our lens database.

This lens uses the KAF4 mount, which does away with the old-fashioned mechanical aperture linkage.  However, this also means that the lens will always shoot wide-open on cameras older than the K-50.  You can check the compatibility of the D FA★ 50mm F1.4 with your camera using our new tool.

Premium-quality Star-series lenses deliver the highest performance among the PENTAX SLR interchangeable lens series, and have enjoyed enthusiastic support from PENTAX SLR camera users since the days of film. In addition to the initial design concepts of optimum image quality and large apertures for maximum light transmission, the series has embraced the additional concepts of exceptional toughness and outstanding operability, achieved through the development of a dustproof, weather-resistant lens housing. The resulting lenses provide superior dependability in wide range of shooting conditions.

This lens has been developed as a new-generation member of the high-performance Star series — a lineup designed to deliver extra-clear, high-contrast images with edge-to-edge sharpness while keeping aberrations to a minimum. The lens, which is the result of an extensive review of traditional Star-series standards, provides greatly improved resolving power, which enables it to deliver excellent imaging performance even with more advanced, next-generation camera bodies. Developed as the first model of the new-generation Star-series lenses, the new lens boasts an extra-large F1.4 maximum aperture, useful with many different subjects in a range of applications, including portraiture with an effectively de-focused (bokeh) background, and handheld shooting of indoor scenes. It provides exceptional image quality even at open aperture, as well as outstanding performance at close ranges.

The lens is treated with PENTAX-developed Aero Bright Coating II — a lens coating developed using a state-of-the-art nanotechnology process. It consists of a silica aerogel layer with a uniform porous structure over a regular multi-coating layer that reduces surface reflections across a wide wavelength range and produces crisp, high-quality images.

By coupling this advanced lens coating with the high-grade, multi-layer HD (high definition) Coating, average reflectance in the visible ray spectrum is reduced to less than 50% compared to conventional multi-layer coatings. As a result, the lens effectively reduces flare and minimizes ghost images even in demanding lighting conditions, such as backlighting. The lens incorporates three super-low dispersion glass elements and one aspherical element to effectively compensate for chromatic and spherical aberrations, enabling it to produce brilliant, high-contrast images with edge-to-edge sharpness. Since distortion is minimized even at a focusing distance of approximately one meter, the lens produces crisp, distortion-free images over the entire focusing range, from the minimum focusing distance to infinity.

Developed as an AW (all weather) model, this lens features a dependable dustproof, weather-resistant body with eight special seals to prevent the intrusion of water and dust into the lens interior. When paired with a PENTAX weather-resistant digital SLR camera body, it forms a durable, reliable digital imaging system that performs superbly in demanding conditions — even in rain or mist, or at locations prone to water splashes or spray.

This lens features a newly developed ring-type SDM (supersonic direct-drive motor), which generates as much as 7.5 times the torque as the SDM installed in previous-generation lenses. This enormous driving power assures a smooth, high-speed shift of the heavy, multi-element rear lens group during focusing operation.

HD PENTAX-D FA★ 50mm F1.4 SDM AW will be available in late July 2018 at www.ricohimaging.com and retail outlets nationwide for a manufacturer’s suggested retail price of $1,199.95.

Visit the lens forum to discuss this lens further.