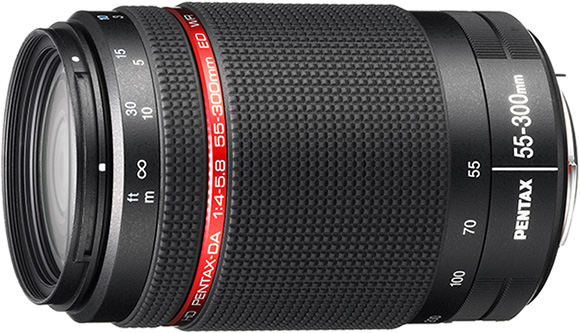 Pentax has just announced that they will be adding the 'WR' (Weather Resistant) epithet to the DA 55-300mm, one of the most popular lenses that Pentax currently has in its lineup. The HD DA 55-300mm WR is a variable aperture medium-to-super telephoto zoom lens that is designed specifically for Pentax's APS-C line of digital DSLRs (Pentax K-3, K-5/II/IIs, K-50, etc.).

Continue on after the break for the main features of the new HD Pentax-DA 55-300mm F4-5.8 ED WR as reported directly from the Ricoh Imaging Company press release, as well as our initial synopsis what it all means.

The new 55-300mm lens will start shipping in November for $449 and is already available for pre-order at B&H photo.

With its wide zoom coverage of approximately 5.5 times, the lens offers focal-length coverage from 84.5 medium telephoto to 460mm super telephoto (in the 35mm format), making it ideal for use with a wide variety of subjects and applications including portraits, sports and landscapes. It incorporates two ED (Extra-low Dispersion) glass elements in its optics to effectively compensate for chromatic aberrations over the entire zoom range and deliver well-defined, true-to-life images.

The lens is treated with HD (High Definition) coating, a PENTAX-exclusive multi-layer lens coating that assures higher light transmittance and lower reflectance than conventional multi-layer coatings. This means it produces sharp, clear images free of flare and ghost images, even under such adverse lighting conditions as backlight.

The lens features weather-resistant construction to prevent the intrusion of water and moisture into the lens barrel. When the lens is mounted on a PENTAX weather-resistant digital SLR camera body, the user is assured of greater durability and reliability when shooting in rain or mist, as well as at locations subject to a spray or splash.

The lens features the PENTAX-developed Quick-Shift Focus System, which allows the user to instantly switch to manual-focus operation after the subject is captured in focus by the camera’s AF system.

For those that are unfamiliar with Pentax's lens line-up, it is important to note that save for the HD coating and the weather sealing, this is the same exact lens as the "smc DA" version that has been in production for the past five years. The smc PENTAX-DA 1:4-5.8 55-300mm ED is Pentax's consumer telephoto zoom offering, and it's one of the most popular lenses Pentax makes. At 89 total reviews in our lens database, there are only two zoom lenses that offer more user reviews, both of which are the professional grade DA* lenses. Despite 89 reviews, it's the 5th highest rated lens with a cumulative 8.63/10 rating and with an overwhelming 98% of those reviewers recommending it towards others.

Despite its popularity amongst Pentax photographers, one of the most consistent criticisms was the lack of weather sealing. Pentax is often considered to have the most complete weather sealed DSLR system and in the most compact manner (and definitely for the lowest entry fee). We had our reservations regarding making such a claim of 'completeness' without a consumer weather sealed option, as the only zoom to offer that zoom range is the lauded smc PENTAX-DA* 1:4 60-250mm ED [IF] SDM, a professional-grade lens that is in an entirely different league and thus price bracket (at three times the price of its 55-300mm cousin!). In completing it's weather sealing range from 18mm all the way to 300mm in its consumer DA line of lenses, Pentax has offered its users on a budget the tried and tested Pentax weather resistance they have demanded for their telephoto adventures, and we couldn't be more pleased to see this new version for this intrepid capability alone! Yes, it's overdue by quite some time, but as the cliché goes, better late than never. And until today, Pentax's only budget-friendly weather-sealed option stopped at 135mm with the smc PENTAX-DA 1:3.5-5.6 18-135mm ED AL [IF] DC WR.

The only other change to come with the revamped HD 55-300mm WR zoom is the prefix. 'HD', or 'High Definition" for Pentax's new nano-coating that was announced during Photokina 2012, promises better flare reduction and resistance against ghosting. As such, a higher level of contrast and clarity is inherently expected out of the new HD variants as opposed to their 'smc' (Super Multi Coat) predecessors. Because the only 'smc' lenses to be offered as HD remakes still haven't been tested, we are unable to verify as to whether these claims are legitimate or nothing more than empty marketing.

Despite our preference towards the silent offerings, we realize that the installation of a focus motor inside the lens would be the reason for an entirely new lens design (and thus a different lens design optically) because of the already tight tolerances made tighter by the added seals. So while we naturally fell into the trap of being initially disappointed by this exclusion, we are more than happy to make this compromise to weather seal one of the most versatile lenses in Pentax's arsenal!

Just like with the HD DA Limited lenses, we will soon be reviewing the new "HD" DA 55-300 WR in order to see how much of an improvement the new coating is. In the mean time, even if there is no difference (which we are confident won't be the case), we are confident we can speak on behalf of the Pentax community that weather sealing the DA 55-300 is one of the most welcome and overdue upgrades in the Pentax line-up! Stay tuned!