By PF Staff in Pentax Announcements on Jun 8, 2016 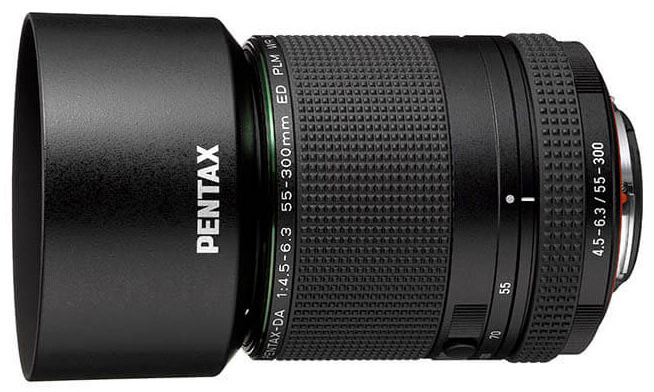 Since the K-70 debuts hybrid live view/video AF featuring phase detection points, this lens really is all about fast AF performance, especially for video.  This is an area in which the performance of previous Pentax bodies had been quite limited.  With a PLM or DC lens mounted the K-70 supports AF-C in video mode.

Electromagnetic aperture control is not a new technology— Canon EF lenses have been using it for decades, for instance. But it is slowly being rolled out in DSLR mounts that formerly relied on the stop-down lever.  We've seen it on recent high-end Nikon lenses, and now, Pentax is giving it a try in this new telephoto zoom.  Thanks to this design, the traditional stop-down lever is no longer needed to operate the aperture diaphragm.  Instead, a motor in the lens automatically stops the aperture down at the time of image capture.  This allows for greater precision, gradual adjustments, and quieter operation.  The trade-off is lack of backwards-compatibility with DSLRs that do not receive firmware updates.  This lens has received a new KAF4 mount designation.

Like the DA 18-50mm RE duo, the new 55-300mm's barrel can be collapsed using the zoom ring.  When stowed, this shortens the lens by nearly 3 centimeters compared to the previous 55-300mm.  The new 55-300mm also features an updated optical formula to facilitate internal focus and a rear-mounted focusing ring.  The trade-off for its compactness is the loss of about half a stop of light throughout the range, compared to the old lens.

Other features of the lens include weather-sealing, HD coating, and rounded aperture blades.

Availability will be announced in July, and the launch price is set at $399.

Full specifications can be viewed in our lens database.

Notice the lack of an aperture level on the lens mount.  Remaining electrical connections are unaltered compared to the KAF3 mount.  Click on any thumbnail to enlarge.

PENTAX HD (high-definition) coated optics deliver sharp, bright, high-contrast images free of flare and ghosting. The HD PENTAX-DA 55-300mm F4.5-6.3ED PLM WR RE lens offers a minimum focusing distance of 37.4 inches (0.95 meters) to further expand the range of photographic applications. With a fully retractable design, the lens measures only 3.5 inches (89 millimeters) long when retracted, and weighs less than one pound (442 grams), making it easy to carry around, even for casual shooting.

Fully weather-sealed, this lens is a durable and dependable companion for outdoor shooting—even in rain, snow or other wet conditions—when used with any of the many weather-resistant PENTAX DSLRs, such as the new K-70.

Availability of the HD PENTAX-DA 55-300mm F4.5-6.3ED PLM WR RE lens will be announced in early July. When available, it can be purchased at www.ricohimaging.com for $399.95, as well as at Ricoh Imaging-authorized retail outlets throughout North America.
Main Features

With the adoption of a rear-focus system, the lens is almost 10 percent lighter than the PENTAX’s previous 55-300m lens—the HD PENTAX-DA 55-300mm F4-5.8ED WR. By driving this focusing lens using a pulse motor (PLM), which is directly linked to a lead screw, this zoom lens also operates faster — approximately 8.3 times at its wide-angle end and approximately 1.7 times at its telephoto end —and quieter than its predecessor. When mounted on the new PENTAX K-70 digital SLR camera body (also announced today), it assures smoother, faster AF operation with dimly lit subjects, thanks to an improved AF algorithm that exchanges AF data between the camera body and the lens with greater precision. Operability of its power-assisted focus system during manual-focus operation has also been improved. Since its distance ring is designed to accurately detect the angle of rotation and swiftly react to a change of angle, this zoom lens can shift its focusing lens smoothly in response to distance ring operation.

This is the first K-mount lens to feature an electromagnetic diaphragm control system.* When mounted on the new PENTAX K-70 digital SLR or other compatible camera body, it assures smooth, high-precision aperture control during video recording. This state-of-the-art system shifts the aperture setting automatically and smoothly to result in more natural, true-to-life videos, even when the brightness level of the subject changes drastically, such as a live theater performance or a sunlight- streaked forest scene, or with active subjects such as athletes and animals. Coupled with the PLM mechanism, the system also assures smooth AF tracking operation and exposure control, while minimizing the intrusion of focus- and aperture-shift noises during video recording.

* NOTE: This lens’ KAF4 mount is compatible with an electromagnetic diaphragm control system. In order to use this lens, the camera’s firmware must be upgraded to the latest version (except for the PENTAX K-70). Cameras compatible with this system are: K-1, K-3 II, K-S2 and K-S1. If this lens is mounted on a camera without proper firmware upgrade, its diaphragm control mechanism becomes inactive, making it impossible to obtain correct exposure.

With focal lengths from 84.5mm to 460mm (in the 35mm format), this telephoto zoom lens provides approximately 5.5-times zoom coverage from medium- to super-telephoto ranges. Its 14-element, 11- group optics include an ED (Extra-low Dispersion) optical element to effectively minimize spherical and chromatic aberrations, while delivering high-resolution, finely detailed images with rich contrast from the image’s center to its edges and minimal color bleeding at any focal length setting. In addition to a short minimal focusing distance of 0.95 meters, made possible by the rear-focus system, the lens barrel has also been designed to be free of extension during AF operation.

Thanks to its retractable structure, the lens is only 3.5 inches (89 millimeters) long and weighs less than one pound (442 grams).

The lens features dependable, weather-resistant construction with 11 sealed parts to effectively prevent the intrusion of water into the lens interior. When paired with a weather-resistant PENTAX digital SLR camera body, the result is a durable, dependable digital imaging system that performs superbly in demanding shooting settings.

・Quick-Shift Focus System allows the user to instantly switch to manual-focus operation, even when the camera’s AF system is in operation.

・SP (Super Protect) Coating applied to the front surface of the lens to effectively repel water and grease.

・Rounded diaphragm with nine blades to produce a smooth, beautiful bokeh (defocus) effect. Designs and specifications are subject to change without notice.