The weekend from a Pentax perspective

By PF Staff in Pentax Announcements on Dec 6, 2013 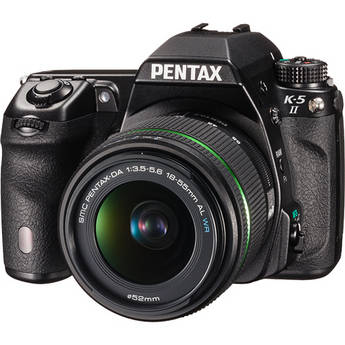 It's been a week since Black Friday, and now that the buying craze has calmed down, we can take a look back and see what Pentax gear was the most popular in the US this year among our forum members.  If you'd like to review this year's deals, refer to these posts:

Like last year, Pentax's MAP pricing policy was dropped for Black Friday, which meant that almost all lens and camera prices could be reduced by a significant margin. None of last year's top 5 best-sellers made it onto this year's list, however: 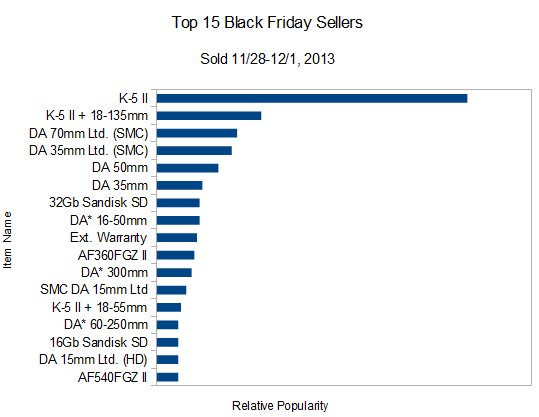 The $599 Pentax K-5 II deal at B&H swept away just about every other offer this year.  At 50% off the camera's original launch price, this came as no surprise.  Over 100 of our members upgraded to the K-5 II as a result of the sale, and the sale cleared B&H's large inventory of the camera thanks to surprisingly-high interest from non-Pentax users.  While the body-only kit was by far the most popular choice for our members, the attractively-priced 18-135mm ($799) and 18-55mm ($699) kits also moved.  The K-5 II is now discontinued, as it has been replaced by the K-3.  It will surely be a while until we see a comparable on a future camera, as even the price of the original K-5 never went this low!

Numerous other premium lenses such as the DA* 16-50mm also ended up selling well, although among the new HD Limited lenses, which were discontinued by a generous $130, only the HD 15mm F4 proved to be a hit.  Last but not least, both of the new weather-sealed Pentax flashes made it onto the top 15 list, as they were discounted by $130-150.

As a result of the Black Friday sale, B&H, Adorama, and Amazon have nearly cleared their entire inventory of SMC Limited lenses.  The K-5 IIs continues to be available for $999 as there were no compelling offers on it during this year's sale.