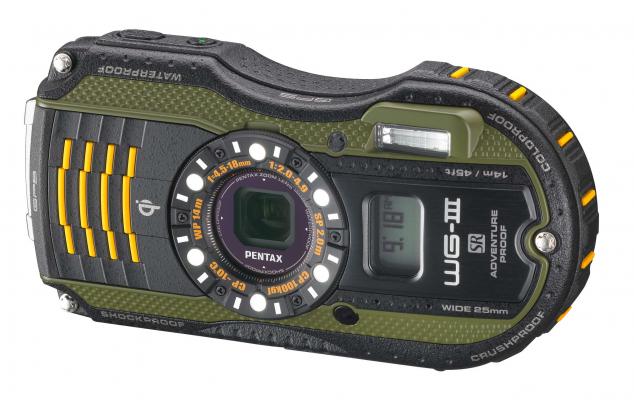 Pentax has just officially announced their 2013 lineup of outdoor digital cameras, which includes the new Optio WG-3, WG-3 GPS, and WG-10 waterproof compacts, designed for those who want to have a digital camera capable of withstanding just about anything.  The outdoor series now includes a high-end camera as well as a more affordable alternative, which is a first for Pentax.  Let's start by taking a look at the WG-3 GPS, the new flagship of this series.

In a nutshell, the Pentax Optio WG-3 GPS is an upgraded version of the WG-2 GPS with a host of new features as well as improved durability.  It features a 16-megapixel back-lit CMOS sensor and supports full-HD video shooting as well as a new slow-motion mode in 720p.

First and foremost, the WG-3 has gotten a new lens which is both wider and faster, allowing more light to pass through at both the wide and the tele ends of its zoom range compared to its predecessor.  The new 4.5-18mm F2-4.9 lens is equivalent roughly to a 25-100mm lens on film, thus offering 4x zoom and the widest field of view in its class.  The WG-2 featured a 5-20mm F3.5-5.5 lens.  Pentax states that this new lens will let you capture better underwater photos.

Next up is Shake Reduction: the WG-3 now features sensor-shift shake reduction, the most effective form of stabilization available for a compact camera.  This means the camera can move the sensor around using magnets to compensate for external movements. 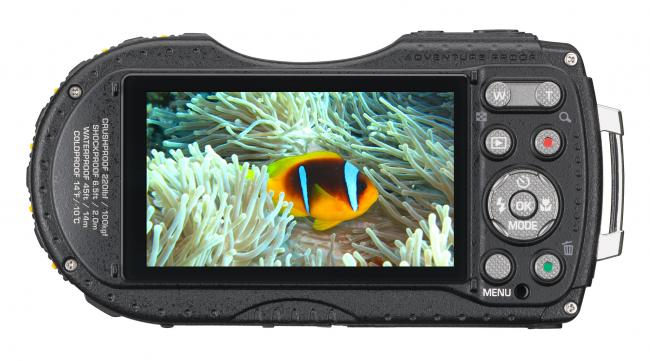 The WG-3 specifications state that it is waterproof to approximately 14 meters (approximately 45 feet), which is 2 meters more than the WG-2 and WG-10.  Its shock resistance has also been improved: Pentax states that the WG-3 will be able to withstand being dropped from a height of 2 meters, compared to the 1.5 meters of its predecessor.  Pentax recommends that you keep the camera underwater for at most 2 hours at a time.

Pentax has also added an electronic level to the WG-3 to make it easier for you to get perfectly-aligned shots.

Finally, the WG-3 GPS supports wireless recharging via the Qi inductive power standard, meaning that you won't need to open the camera to charge it when in the field, thus reducing the risk of dust and dirt getting stuck to your weather seals and compromising the waterproofing.  The WG-3 GPS also has an LCD on the front which can display heading, time, or barometric information.

A couple of other smaller changes have been made, such as the addition of a rear IR port for wireless shooting from both the front and the back.  The camera's firmware has also been upgraded to deliver better image processing and overall performance.

The WG-3 GPS will soon become available in both purple and green for $349.

The WG-3 doesn't have a built-in GPS, the front LCD screen, or support for Qi wireless recharging, but it is an other ways identical to the WG-3 GPS.  Its launch price of $299 puts it below the WG-3 GPS but above the WG-10, and it will be available in orange and black. 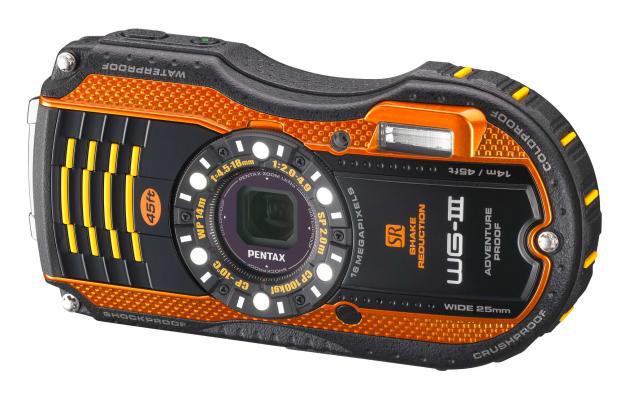 Like the WG-2, the WG-3 features 6 LEDs around its lens to light up underwater subjects and support digital microscope shooting.  There are other things that haven't changed compared to its predecessor, such as the anti-reflective, 3-inch 460k-dot (half-VGA) rear LCD, 16-megapixel sensor, 125-6400 ISO range, and 1/4000s-4s hybrid shutter.  Full specifications for the WG-3 will be posted in our camera database shortly.

Compared to the WG-2, the WG-3 is about 20 grams heavier, weighing it at 219g empty and 239g fully loaded with a card and battery.

We will also be posting pricing information once it becomes available. 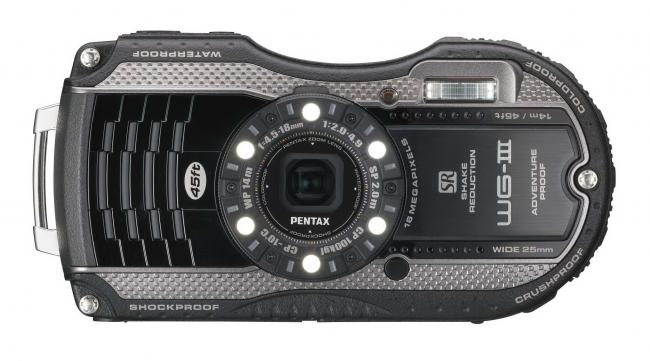 Based on the specifications that we have received, WG-10 appears to be a simple reincarnation of the Optio WG-1, less the GPS support.  It will be available in gray and red and it will be affordably-priced at $179 and it will only be available at Target stores. 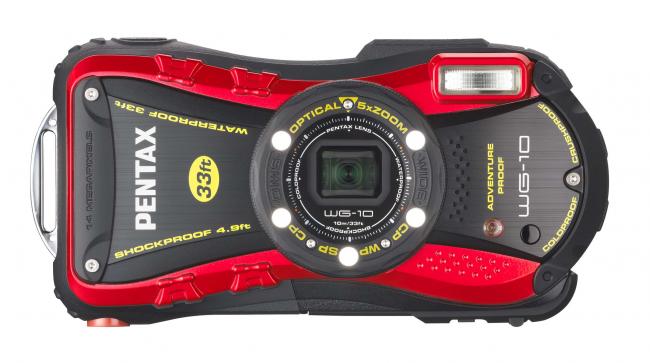 The WG-10 is meant to be affordable and is thus only waterproof to about 10 meters (33 feet), which is still more than most people will need.  It does have new firmware for the latest in in-camera image processing, but apart from that, it appears to have the same specifications as the WG-1 (originally launched in 2011): 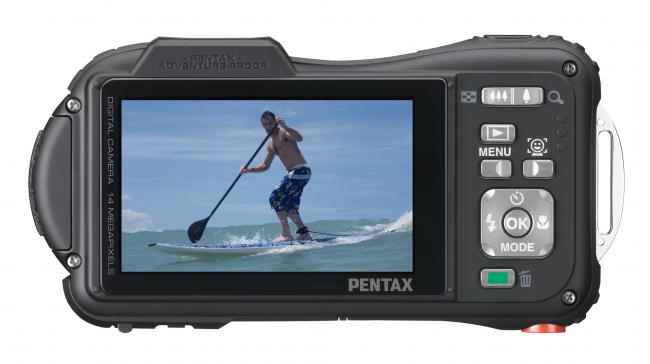 We think that these three cameras will be very popular among those who would like to take photos in the most demanding conditions, and we are happy to see a steady of the Pentax outdoor lineup.

As an outdoor brand, Pentax also offers the affordable K-30 DSLR, which is fully weather-sealed for easy shooting in rain, snow, or cold.