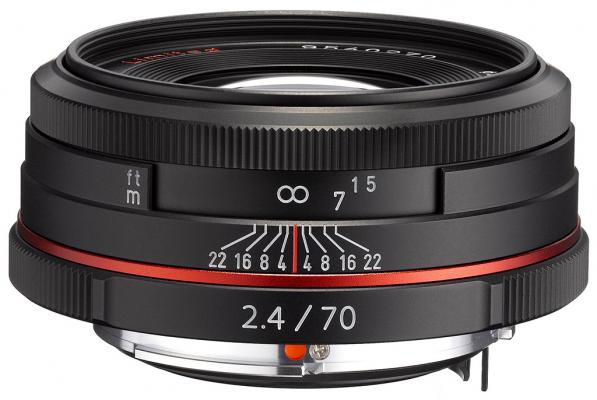 Pentax have just announced a facelift of their entire DA-Limited lens lineup, as optically-improved and cosmetically-redesigned "HD" versions of the DA 15, 21, 35, 40, and 70mm Limited lenses will soon be replacing the current DA-Limited lenses.  All of the new "HD" lenses will be available in both black and silver, and their glass has been treated with Pentax's new HD coating, a nano crystal lens coating that does a better job of reducing ghosting and flare than traditional multi-coatings.  In the past, silver versions of DA limited lenses were only offered as special editions.

The aperture diaphragm in all the new lenses also getting an upgrade: their aperture blades will now employ a fully-rounded design.

For the full specifications of each of these lenses, please visit our lens database:

The five new lenses feature a simplified all-metal design complete with red rings to designate the presence of HD coating.  The fundamental appearance of the lens barrel remains unchanged, and the design continues to be minimalistic and focused on compactness above all else.

For those who are unfamiliar with the Pentax lens lineup, know that "Limited" does not mean limited-edition or limited-production.  This word simply designates a trademark lineup of high-end Pentax prime lenses that feature metal barrels and premium optical performance.  These lenses are designed to be very compact, so their maximum apertures are typically slower than what is offered by DA* or DA prime lenses.  DA-series lenses are designed for use on APS-C DSLRs only (however, tess have shown that the DA 40mm does cover the "full-frame" image circle, as it is based on an older film lens design).

Read on for a closer look at each of the new lenses, as well as for pre-order links.  Prices for these new lenses range from $549.95 to $749.95 in the US.  This represents a $50 price increase over the older lenses.  The new HD lenses will start shipping in September.

We will soon be reviewing the new "HD" Limited lenses in order to see how well the new coating suppresses the presence of flare and improves color.  Stay tuned!