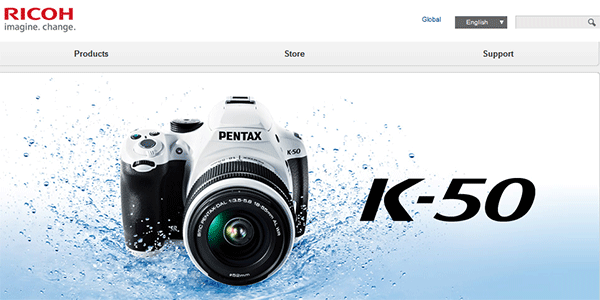 Pentax Ricoh Imaging, the company responsible for the design and development of Pentax cameras, has recently beed officially renamed to just "Ricoh Imaging".  This name change, which went into effect on August 1st, seems to also have affected the branding of all the official Pentax web sites.

Pentax.jp, the official Japanese Pentax site, has been moved to ricoh-imaging.co.jp.  The Pentax name has also been removed from the site's header. Although the new homepage has gotten a minor facelift, most of the site content remains unchanged, and everything continues to be available in both Japanese and English as before.

While the domains of Pentax.eu, Pentax.com.au, and Pentaxwebstore.com remain unchanged for the time-being, these sites have also been re-branded.

With these changes, it seems that we won't be seing the "Pentax" very often outside of product references.  This comes somewhat as a surprise to us, as "Pentax" is a without a doubt a much stronger name in the camera industry than "Ricoh".  Will this move confuse consumers further? Our web site will of course not be renamed to RicohForums.com as a result of this news.

Fortunately, Ricoh Imaging representatives have assured users that Pentax cameras will continue to be produced, and that the Pentax name will certainly not be disappearing from existing product lines.