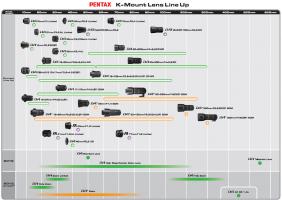 With CP+ now well underway, we have seen many photos or the lenses Pentax recently announced and learned more about them.  PentaxForums.com representatives are now at the show, and we will be interviewing Pentax shortly, so please stay tuned to our homepage for that exclusive coverage!  At a later time we will also comment more about what we have learned about the products revealed thus far.

In addition to a K-mount lens roadmap, Pentax has also published a 645 lens roadmap and a Q lens roadmap, suggesting that both camera lineups will continue to be fully supported in the coming years at the very least.

First, let's take a look at the 645 medium format lens roadmap.  These lenses are compatible with the Pentax 645D professional medium format camera.  The roadmap contains 4 new lenses, once of which has already been announced: 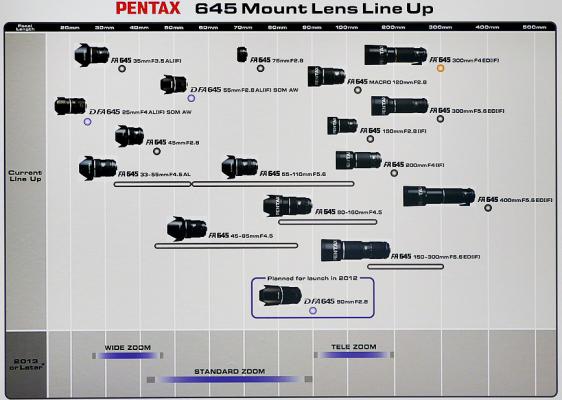 According to the roadmap, the three zooms won't be launched until next year.  This year, however, we should see the 90mm go into the production, and the 25mm F4 wide-angle lens, announced last year, should finally become available as well.

One thing that should be noted about the 645 lens lineup is that all the FA (autofocus film era) lenses listed on the roadmap are still in production and can be purchased new in Japan only.  Looking at the focal lengths covered by the planned new zoom lenes, it seems that Pentax wants to create a convenient zoom kit that better suits the 645D's cropped format sensor (the crop factor between a 645D and a 645 film camera is about 1.3x).  Another advantage of the new zoom lenses is that they will be weather-sealed, giving the 645D more versatility in the field.

Next, let's take a look at the Pentax Q lens roadmap.  It contains for new lenses, two of which have been revealed but not finalized:

The addition of 3 new "performance" lenses is a welcome sight, seeing that only two such lenses are currently available (the 01 prime and the 02 zoom).  It also will be interesting to hear how Pentax decides to price the single piece of plastic which constitutes the body cap lens! 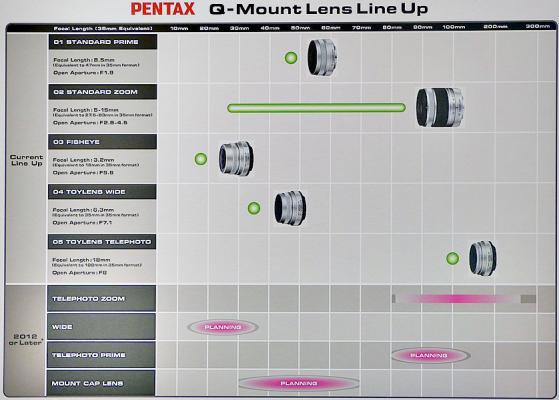 The roadmap doesn't say when the two unannounced prime lenses will be made available, though we wouldn't be surprised to see them toward the end of this year.

Finally, the Pentax K-mount deserves a look, as these are the lenses that can be used with Pentax DSLRs as well as the new K-01.  The roadmap contains 8 lenses, two of which have already been announced: 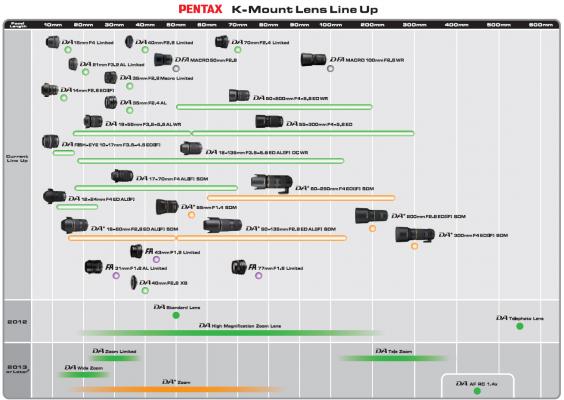 According to the roadmap, we will see the high-magnification zoom later this year, while the other lenses will come out next year.