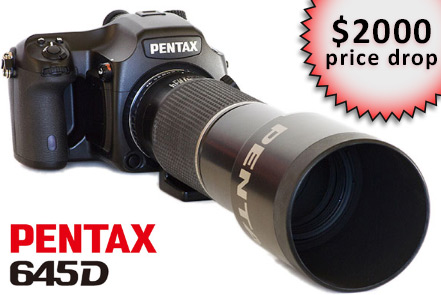 Last month, B&H Photo was selling the Pentax 645D for $6999 with a free D-FA 55mm, which effectively brought the final price of the body to $5800.  However, opting out of the lens would not let you score the camera for less.

Today, the US dealer price of the 645D body has dropped by $2000 to just $4999: an all-time low.  Even though the 645D's performance is comparable to that of 36-megapixel full-frame cameras such as the Nikon D800 and Sony A7r, at this price point we feel that it's once again a very compelling option for photographers who crave high resolution-images.

According to John Carlson of Pentax USA (Ricoh Imaging), the 645D will be staying in the medium-format Pentax lineup as a lower-cost option.  However, since history repeats itself, we can't help but speculate that the 645D will soon be discontinued, as it relies on hardware dating back to 2009 and Pentax typically discontinues outgoing models shortly after the launch of their successors.

To learn more about the 645D, check out our in-depth reviews:

The new Pentax 645Z is expected to start shipping to customers as early as next week, though based on what we know, the first batch has already sold out through pre-orders.  If you're interested in the 645Z, get your order in as soon as possible!  Or, get a 645D at the new low price of $4999.

Last week, Pentax USA hosted a launch event for the 645Z in New York City, where the camera was presented to attendees and used in a studio shoot.  Pentax representatives also met with retailers in the area to showcase the camera's selling points. 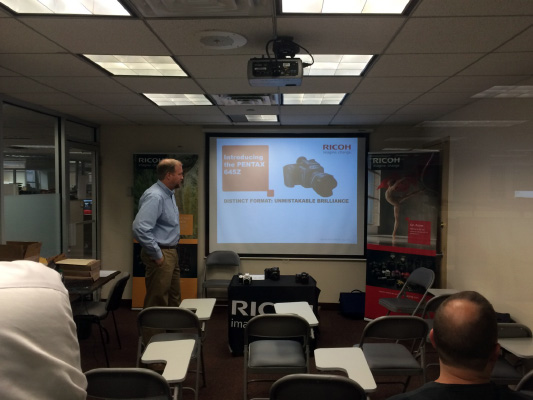 On Wednesday, one of our journalists met with Pentax representatives at the Ricoh Imaging headquarters in Tokyo, who confirmed that first production 645Z units will be in the hands of customers in the coming days.  We will be receiving two 645Z bodies for review, so expect plenty of full-size samples soon, as well as an in-depth comparative review between the 645Z and the Nikon D810, its closest rival under $10,000.

The 645Z is the most affordable 51-megpixel medium format camera on the market, and there's no question that it will be met by high demand and acclaim among studio and landscape photographers.  We can't wait to have it in our hands- stay tuned!