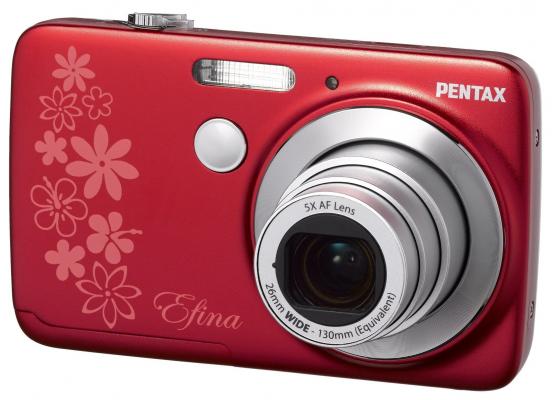 Pentax has just announced the Pentax Efina, a new compact point-and shoot camera targeted at a specific audience according to Pentax: young female photographers.  Based on its specifications, this camera falls slightly below the now-discontinued Optio RS1500, which was launched in 2011.  This suggests that the Efina will enter the market at a very affordable price point. Pentax is doing with this camera what they did with the LS465: competitively targeting it at a smaller group of consumers.

The Efina has a colorful metallic body and is available in four colors. The full specifications can be found in our camera database. The highlights of the Efina are:

As we understand it, the Efina will only be introduced in select markets in Asia.  Pentax USA has confirmed that there are currently no plans to sell it in North America.  While enthusiasts may frown on product announcements such as this one, we believe that it's a sound decision by Pentax from a marketing standpoint.