An accessory for digitizing film photos 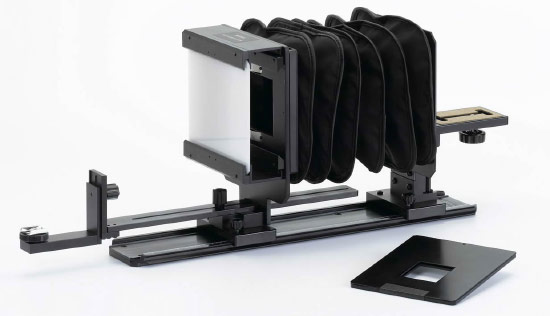 Alongside the new 645Z, Pentax Japan has also officially announced the Pentax Film Duplicator accessory today.  This bellows-like rig makes it easy to digitize negative film and positive slides of various sizes using any DSLR with a macro lens and an external flash.  It makes digitizing film considerably faster and arguably more enjoyable than with a flatbed scanner, and it gives the user more control over the appearance of the final image.

The Film Duplicator weighs 2200g and can stretch up to 90cm to accommodate various lenses, cameras, and degrees of magnification.

To learn more about the film duplicator, check out a demonstration of it in action at the CP+ 2014 show.

Below is a video of the accessory in use with a silver Pentax K-3 and a D-FA 100mm F2.8 macro lens, with illumination from a Pentax AF-540FGZ flash: