By PF Staff in Pentax Announcements on Feb 4, 2015

It has been a long wait.  Die-hard Pentaxians have been craving a full-frame camera for what seemed like an eternity.  The lack of such a camera caused many to leave the brand, explore other paths, and even engage in debates about just about every potential aspect of this mythical DSLR.  As of the writing of this article, our Pentax Full Frame forum contains some 24,000 posts: more than sections about real cameras such as the K-30 & K-50.

For those of you who stuck with us while waiting for that long-desired full-frame, the wait is about to pay off.  It's not April 1st.  Today, with the announcement of two full-frame-ready Pentax D-FA telephoto zoom lenses, Ricoh Imaging also stated in a press release that a Pentax full-frame will hit the market by the end of the year.  Icing on the cake: it will be on display as a reference product at CP+ 2015. Below is an official product photo of the camera in development.  Click on it to enlarge: 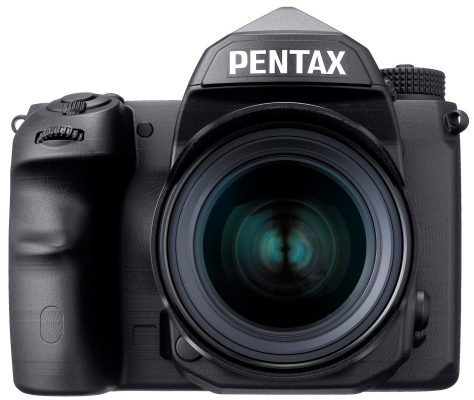 Notice the presence of a placeholder for the SR logo, which implies that the upcoming full-frame will feature in-body stabilization just like existing Pentax cameras.  This will make it unique among full-frame DSLRs.

RICOH IMAGING COMPANY, LTD. is pleased to announce the exhibition of a reference product — a digital SLR camera currently under development — at CP+ 2015, one of the largest and most comprehensive camera and imaging shows in Asia. This annual event will be held from February 12 to 15 at the PACIFICO Yokohama convention center in Japan.

Note: The specifications and exterior design of this product are yet to be finalized.

We will be on site at the CP+ show to report on the event, and as ever you can expect an exclusive interview with Pentax representatives.

Its image circle is optimized to cover even the image size of 35mm film-format SLR cameras. As the result, it not only assures brilliant, high-resolution images without compromising the sharpness at edges even when mounted on an existing PENTAX digital SLR camera body, but it is also capable of accepting future models with larger image sensors without modifications.  Read more

So there you have it: future models with larger image sensors and the Pentax K-mount.  If we had to guess, we'd say 36-megapixels and a slightly bigger body than the K-3 to facilitate a larger grip.  Exciting news lies ahead for Pentaxians, and you'll be the first to learn more by following the PentaxForums.com homepage coverage.

Thank you, Ricoh.  You may be late to the party, but you're about to make loads of Pentax fans very, very happy.