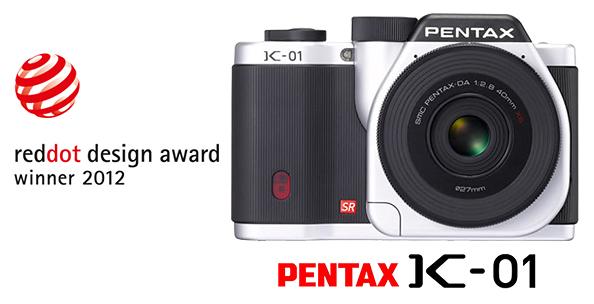 Today, Pentax proudly announced that two of their cameras launched this year, the mirrorless K-01 and the compact Optio WG-2, have each won a prestigious industry award!

The Pentax K-01, pictured above and reviewed last month, was the recipient of the Red Dot Design Award in the "Entertainment Technology and Cameras" category for its innovative design by Marc Newson.  While we aren't surprised that its design is attracting attention, the news that the camera won this award comes as a great positive surprise, given our members' mixed options of the camera's appearance. 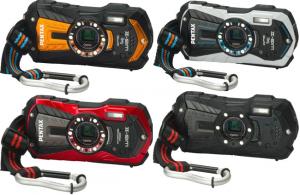 The Pentax Optio WG-2, not surprisingly, received the 2012 TIPA award for "Best Rugged Camera".  As we found in our WG-2 review, while competing cameras share similar specifications with respect to weatherproofing and shock resistance, the Optio WG-2 has more features and better imaging facilities. Namely, its shutter can fire at speeds of up to 1/4000s, which current competing cameras can only go up to 1/1500s.

The TIPA is the Technical Image Press Association, which gives out some of the most-coveted imaging awards on a yearly basis.  Last year, the Pentax 645D was the winner of their "Best Professional DSLR" category, a title which the Canon 1Dx took this year.

Another 2012 winner of interest to the Pentax community was the Sigma 180mm F2.8 macro lens, which won the "Best Expert DSLR Lens" award.

It remains unknown whether or not this lens will be produced in the Pentax mount, but we're keeping our finders crossed!  We contacted Sigma USA only to learn that Sigma in Japan has not yet revealed this detail.  Sigma won another award this year with their 18-200mm II lens, though this lens isn't available for Pentax (its predecessor is, however).

The Red Dot Design Awards are sponsored by the Nordrhein Westfalen Design Center in Germany, and are awarded each year to products released over the last two years.  Nine different design criteria are judged, and the Pentax K-01 was found to be the best out of a batch of more than four thousand products in its category.  This is the first time that any Pentax product has won a Red Dot award.