Pentax K-01 in Blue and White

By PF Staff in Pentax Announcements on Jul 4, 2013 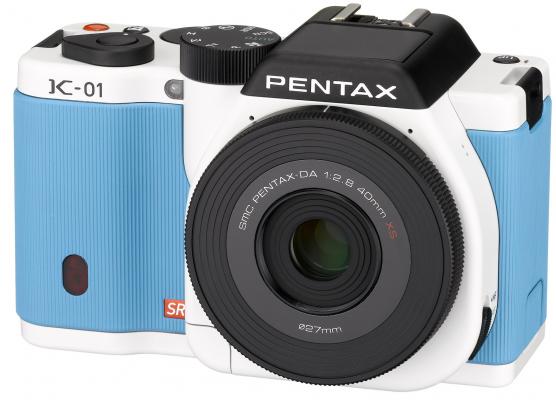 Pentax Japan announced today that the Pentax K-01 mirrorless camera will be soon be re-launched in a new "white and blue" color scheme.  This revival of the camera will be for the Japanese market only, as all the standard K-01 kits were discontinued worldwide earlier this year.

The new K-01 variant will start shipping at the end of July, and it will be bundled with the DA 40mm XS kit lens.

Learn more about the K-01 in our in-depth review or view its specifications in our camera database.

Originally launched in March, 2012, the K-01 was the world's first mirrorless camera to natively accept a DSLR lens lineup.  Its unique styling can be attributed to Marc Newson, a well-known industrial designer.  Despite these selling points, the K-01 did not enjoy much popularity, as reviews of its design proved to be mixed, and the market did not respond well to the idea of a DSLR-sized mirrorless camera.  In the US, the camera was eventually discounted to 33% of its original price, so ultimately it proved to be amazing value for its robust feature set and excellent image quality.