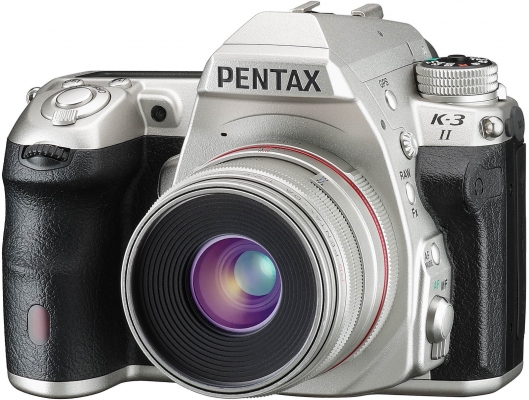 Ricoh Imaging has just announced a special Silver Edition of the Pentax K-3 II to commemorate 80 years of the company.  This is the second special body to celebrate the occasion, following last week's Ricoh GR II Silver announcement.

The Pentax K-3 II Silver Edition will be sold exclusively from Ricoh via ricoh-imaging.com. Its US retail price will be $999.95, and production will be limited to 500 units worldwide.  This is the lowest production count of any special edition Pentax K-mount body to date.  The camera is expected to start shipping from Japan on March 10th, 2016.

From a cosmetic point of view, the K-3 II Silver Edition closely resembles the Pentax K-3 Premium Silver Edition, which was offered in 2014 alongside the original K-3.  It is the perfect body for the six silver HD DA Limited lenses currently available.  The K-3 II is pictured above is the HD Pentax-DA 35mm Limited F2.8 Macro.

Historically speaking, we've seen between one and two special editions of every flagship Pentax DSLR model since 2006.  Do you think we will see a Pentax K-1 Limited in due time?

Learn more about the K-3 II in our in-depth review.

RICOH IMAGING COMPANY, LTD. is pleased to announce the launch of a limited-edition model of the PENTAX K-3 II (launched in May 2015) to commemorate the 80th anniversary of the foundation of Ricoh Company, Ltd. Treated with a special silver-color coating, this exclusive model will be marketed in a quantity of 500 units worldwide.
Main Features

・ A special silver-color coating has been applied to the magnesium-alloy camera body. In order to give a more elegant, high-grade appearance to this exclusive model, its surface features not the original glossy finish, but a high-class textured finish, which requires a more sophisticated quality control process during production.
・ The product box has been exclusively designed for this special model.
・ Since the quantity is limited, this model will be marketed only through the direct-sales stores in each country.