The wait is (almost) over 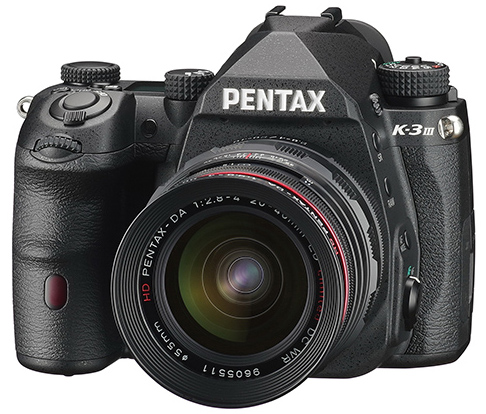 This summer has been full of slow but steady updates about the upcoming Pentax APS-C flagship DSLR.  Today, the wait is finally over—at least as far as specifications are concerned.  In addition, we've learned that this new model will be named the Pentax K-3 Mark III, or simply the K-3 III.  Though arguably less creative than some may have speculated, the name solidifies this camera's place as the true successor to the Pentax K-3 II.  The new camera will be officially launched in late February, at CP+ 2021.

Based on the specifications posted today on the Ricoh Imaging Japan website (summarized below), it looks like the K-3 III's hardware has received substantial improvements over its predecessors, which date back to the mid 2010's.  The image sensor will be a 26-megapixel unit with sensitivity up to ISO ~1,600,000.  On a more technical level, notable enhancements include UHS II memory card speeds, USB 3.2 with a Type C port, 101-point autofocus, a 307K-pixel metering system, 50% higher rear LCD resolution, and burst shooting up to 12FPS (Pentax's fastest to date).  This hardware speedup means that we will also finally see 4K video support at 30p as well as full HD at 60p, though it appears that video functionality has otherwise been largely left unchanged.

Of course, the K-3 III comes with all of the powerful features Pentax users are accustomed to, such as Pixel Shift super resolution, 5-axis Shake Reduction (now improved by half a stop up to 5.5 stops of compensation), silent Dust Removal, Astrotracer support, and more.  Another highlight is the camera's overhauled optical viewfinder, which boasts an impressive 1.05x magnification at 100% coverage.  This means that the size of the image will be close to that of a full-frame viewfinder.

Although we now know most things about the K-3 III, a few minor details remain to be clarified, such as the price, on-board GPS support, and accessory compatibility (e.g., tethering software and battery grip).  Current speculations suggest a launch price around $1900, which would place the K-3 III in the same price class as the full-frame K-1 II.

More insights about this announcement can be found in the video below.