The K-3 DSLR with a special gunmetal finish and grip 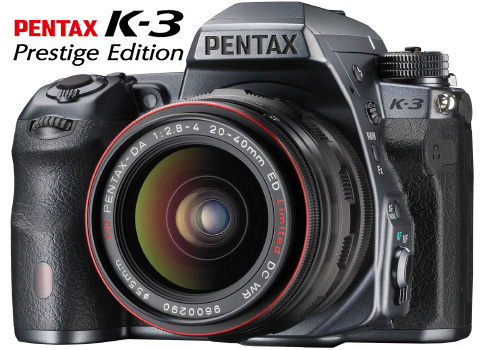 Pentax has just officially announced the Pentax K-3 Prestige Edition, a special version of the K-3 featuring with a gray gunmetal finish, black logo lettering, and an accompanying grip.  The Pentax K-3 Prestige also includes a special black leather neck strap (O-ST1403) in addition to the other accessories typically included with the camera.  The K-3 Prestige will come loaded with the latest firmware from the factory, but in all other ways, its specifications are identical to those of the standard K-3.  Like the black K-3, the K-3 Prestige has a magnesium alloy finish, weather sealing, and a stainless steel chassis.

This is the second special version of the Pentax K-3, following the Pentax K-3 Premium Silver, which was launched alongside the black K-3 last November.

In the US, the Pentax K-3 Prestige retails for $1399.95 and it will start shipping in August: click here to pre-order yours at B&H.

The Premium Silver Pentax K-3 was produced in considerably higher quantity than previous special edition cameras.  Following the initial production run of 2,000 units (which sold out quickly), additional silver bodies have been leaving the factory: the Pentax K-3 Silver is still in stock at B&H for $1319.00 and at Adorama for $1296.95 (originally $1599). According to the Pentax press release, 2,000 units of the Prestige Edition will be produced; we have no way of knowing whether or not additional units will be produced, though historically this is unlikely.

Now that there are two special K-3 bodies out there, you can save big on the black version via the deals below.  All the kits below include a free Pentax D-BG5 battery grip (a $218 value), and have seen a $100 price drop:

Since US authorized Pentax retailers are not allowed to drop the price of the K-3 body below the manufacturer's MAP (minimum advertised price), they include free accessories to make up for it.

The photo below depicts all 3 versions of the Pentax K-3 side-by-side.  Note that the special editions kits do not include the pictured lenses:

The three versions of the Pentax K-3 (click to enlarge)

Click on either thumbnail below for a closer look at the Pentax K-3 Prestige Edition.

Want to get your hands on one of these? Pre-Order the K-3 Prestige today at B&H or Adorama.