Remaining stock in stores is running out 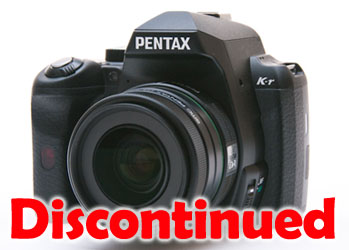 After a brief period of uncertainty, it is now more or less official that the Pentax K-r has been discontinued as it has reached the end of its intended production cycle.  We have confirmed this at both B&H Photo and Adorama, as well as other sources.

In the absence of any new product announcements from Pentax, we can only remain hopeful that a replacement body will be announced early next year, and that K-r stock won't run out in stores during the holiday season.

This means that if you want a K-r now, you will have to act quick.  Read on for a breakdown of which K-r kits are still available.  Currently, the best deals are at adorama: $539 for a black k-r kit or $499 for a red or white K-r body.

At B&H Photo, all K-r kits are no longer available except:

At Adorama, there is a somewhat larger selection:

On Amazon, the prices are a bit higher, but all of the above are available. However, it is indicated that a limited quantity of each item remains.  In addition, you can get the following there:

We can only remain hopeful that a new body is on its way.  Until then, you might have to do your holiday shopping earlier if you were considering a K-r!