A mid-range DSLR with a redesigned user interface and body

Pentax has just officially announced the new K-S1 DSLR camera: a compact yet feature-packed 20.2-megapixel body with a unique design and new user interface designed to appeal to users of modern portable electronics.  In terms of specifications, this camera is classified as a mid-range body.  Thus, it falls just below the Pentax K-3 in the current DSLR lineup and incorporates technologies from the flagship as well as the Pentax K-50.

Based on the appearance of the Pentax K-S1 we were expecting to see a basic entry-level camera, but what we have here is a clear, targeted effort to regain customers who might have abandoned their DSLRs in favor of a smartphone or high-end compact.  The K-S1's redesigned user interface abandons some of the traditional controls of a DSLR it favor of what Pentax calls a "flat field UI".  This entails the elimination of the top mode dial and front control wheel in favor of having nearly everything on the back of the camera.  In addition, the K-S1's video mode is now accessed via the power switch on the top of the camera, which promises to provide considerably quicker and easier access to video than other Pentax bodies.  All this is made possible thanks to a new PRIME M II processor. 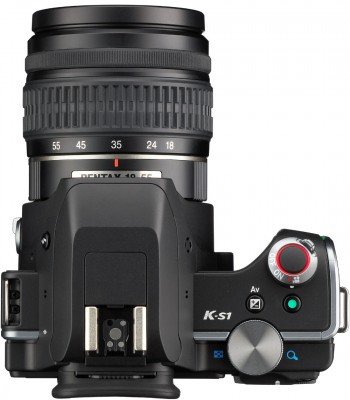 The K-S1 is the first Pentax camera to feature a filterless 20.2-megapixel APS-C sensor.  It will be interesting to see how this sensor compares to the tried-and-tested (but aging) 16-megapixel chip that was used in several prior generations since 2010.  Image quality as well as the usability of the K-S1's new interface will be the primary focus of our upcoming in-depth review.

In the US, the K-S1 will be available in a total of 12 different colors.  Three colors (black, white, blue) will be available in body-only, single-lens, and dual-lens kits, while the remaining colors (cotton beige, linen brown, denim blue, tweed grey, sunset orange, dusk gold, moon silver, midnight black, dawn purple) are less mainstream and thus paired only with a 18-55mm lens.  The K-S1 is launching at a price of $749 for the body only, $799 for the 18-55mm kit, and $899 for the 18-55mm + 50-200mm.  All kits come with a generic black 18-55mm except for the white color option, which is paired with a white/grey lens. 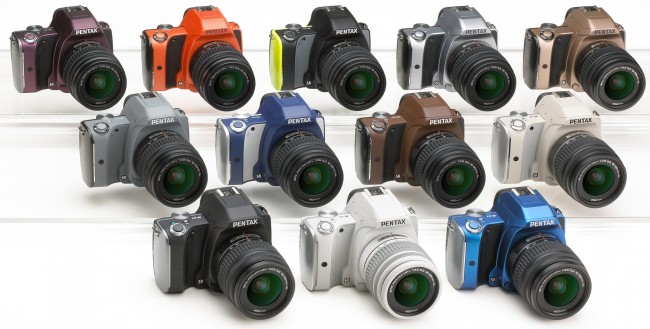 Now, let's take a closer look at the K-S1's specifications. The K-S1 incorporates some of the latest features and technologies from the Pentax K-3 flagship, including:

Core hardware such as the shutter, metering system, and autofocus is borrowed from the K-50 line.

The K-S1 is among the smallest DSLRs currently on the market.  It's considerably smaller and lighter than the Pentax K-50, but not quite as tiny as the Canon SL-1, the world's smallest DSLR.

View the full K-S1 specifications in our camera database.

The lens includes a newly-designed facade ring to cover the hood mount when no hood is mounted (do yourself a favor and get a hood if you plan to use this lens exclusively).

See below for additional photos of the Pentax K-S1.  Click on any thumbnail to enlarge.

Denver, Colorado August 27, 2014 – Focused on expanding the number of PENTAX DSLR owners, RICOH IMAGING AMERICAS CORPORATION is excited to announce the launch of the PENTAX K-S1 DSLR camera. By combining proven imaging technology, distinct design cues and a flat field user interface (UI) the K-S1 appeals to the next generation PENTAX owner without surrendering the performance expected in a mid-class camera.

Building on the many technologies benchmarked in the company’s popular K-3 advanced DSLR; the K-S1 incorporates a newly designed 20 megapixel image sensor, super-high sensitivity ISO 51200. In addition this model contains in-body shake reduction, an AA filter simulator, 100% field of view glass pentaprism viewfinder, and 5.4 frames per second shooting at a fast 1/6000 shutter speed. Adding to the user experience is the camera’s unique flat field user interface, which integrates a back-lit LED selection dial, four-way navigation, and a bright 3” 921,000 dot LCD that breaks tradition of the knobs and buttons found on traditional DSLR cameras.

The PENTAX K-S1 is designed to attract a mid-level customer who is accustomed to a mobile interface and is looking for a similar interaction in a DSLR. The simple UI eliminates many of the complexities of a DSLR and provides immediate feedback including shooting parameters, filter selection and effect modes, even in total darkness. The camera’s power switch, mode dial, OK button and grip all feature LED illumination; each of which indicates the current status of camera operation. This intuitive UI and design combined with category leading technology delivers a powerful imaging engine that is simple to use.

"With the K-S1 we are building on our solid reputation as a camera company and inviting new customers to experience the PENTAX advantage” said Jim Malcolm, Executive Vice President, Ricoh Imaging Americas Corporation. “Our core PENTAX products provide an important foundation that the K-S1 builds upon."

The optional Flucard for PENTAX offers additional features such as Wi-Fi transfer, wireless live view, and Remote Capture control; letting users take control of their camera settings with a smartphone, tablet, or computer and save images directly to a mobile device.

We offer additional commentary on this product announcement in a separate post.  Before reading on, tell us (and Pentax) what you think about this camera in the comments section below.