By PF Staff in Pentax Announcements on Feb 8, 2012 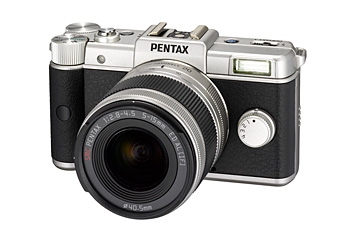 Pentax Japan has just announced that a limited silver edition of its Pentax Q will soon enter a short production run of just 1,600 units.  The silver Q won't differ in any way from the regular Q, though it will come pre-loaded with the latest firmware from the factory.  Additionally, it will come bundled with the 02 Standard Zoom lens (rather than the 01 standard prime), which leads us to believe that the price of the limited kit will be at least $1000.

Producing a limited edition camera body, or a special silver body, is nothing new for Pentax.  In fact, every upper-end Pentax SLR since the K10D has had a limited version- so if you're looking for exclusivity, you won't achieve it by getting a limited silver camera.  They do make for excellent collectors' items, however.  For example, the Pentax LX2000 film camera with the 50mm F1.2 Special lens, pictured below, sells for $3000-$5000 on eBay. 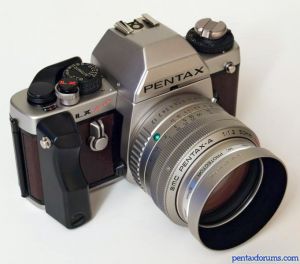 Unlike the LX, however, Pentax Q is more of a fashion item than a camera- in fact, it may well be the only interchangeable-lens camera with a point-and-shoot sensor.  Read our Pentax Q review for more!  This doesn't mean that we simply hate the Q, but in light of the recent Pentax K-01 launch, it is difficult to see its place on the market.

Of the 1,600 units to be produced, we expect that only a few hundred will reach the United States.

You may also be interested in reading the news posted earlier today in which Pentax announced two new Q-mount lenses as well as a K-mount adapter, among other SLR lenses. For more details on the Pentax Q-mount lens system, visit our lens database.