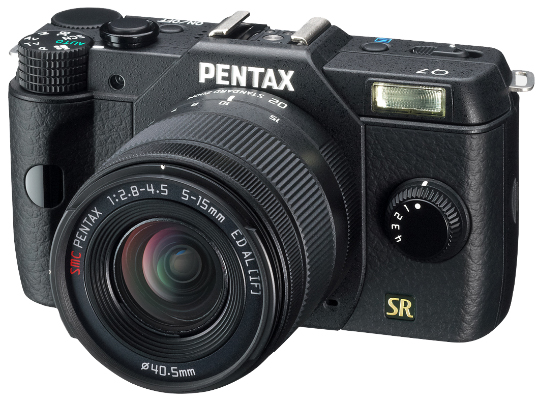 The Q7 is an incremental upgrade over the Q10, just like the Q10 was an incremental upgrade over the original Q.  The main difference between the Q7 and the Q10 is that the Q7 features a new 12-megapixel sensor measuring 1/1.7" diagonally.  This sensor is substantially larger than the 1/2.3" unit found in older Q models, and it is the same size that manufacturers typically use in premium point-and-shoot cameras.  The Pentax MX-1 and the Ricoh GRD IV feature similar sensors.  Like the Q and Q10, the Q7 supports JPEG as well as RAW image capture.

This single change is probably the biggest thing that has happened to the Pentax Q system since its launch, however. We hope that it will be a game-changer in the eyes of current Pentax fans and potential customers, as outside of Japan, the Pentax Q system has not seen much popularity compared to other compacts.

This table compares the sensor found in the Pentax Q10 with the one forund in the Q7:

As you can see above, the Q7's sensor has about 50% more area than the old sensor, and this means that it will be able to deliver cleaner images with less noise and more dynamic range.  We expect the Q7's image quality to be very similar to that of the Pentax MX-1 (see our in-depth review here).

The fact that Pentax has increased the sensor size implies that all current Q-mount lenses support the larger 1/1.7" image circle.  Those using adapted DSLR lenses with the Q7 will notice that the crop factor is smaller, though given the higher quality of the sensor and reduced risk of diffraction, we do not anticipate that the effective "reach" will change.

Other differences between the Q10 and the Q7 are subtle.  Both share the same body design, though there may be slight variations in how different variants of the Q7 are colored.  For example, the ring around the front dial on the silver Q7 is silver, while the one on the Q10 is black.

Pentax claims to have improved the Q7's autofocus, and the specifications indicate that AF will now work in EV0 (down from EV1).  The full Q7 specifications can be viewed in our Pentax Q7 camera database entry.

The Q7 will be available in a total of 120 color combinations (20 more than the Q10), though retailers will only stock a black, white, and yellow variant.  All other colors will be available for special order.