as a DA-series lens exclusively for the 645D

Pentax announced today a "new" 645-format 25mm F4 lens, to be known as the SMC Pentax-DA 645 25mm F4 AL [IF] SDM AW. The "new" designation is in quotes because this lens seems to be very similar (if not identical) to its D-FA series predecessor, except that the lens hood has been stretched and the badging has been changed.  Its price will also be $4,995. 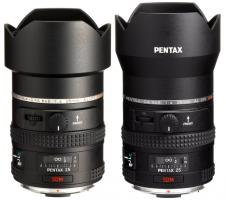 The new 25mm lens is no longer compatible with film-era Pentax 645 cameras, and we believe that this is because the lens hood has been stretched.  Does this foreshadow that Pentax has decided not to produce a "full frame" digital 645 body in the future?

Re-releasing a lens that's so similar to the original version is an interesting move by Pentax, and we can only hypothesize that the reason they are doing so is to reduce the presence of chromatic aberrations/flare on digital. More more details about this problem, take a look at Hark Lee's review of the D-FA 25mm F4.

The predecessor to this lens was never actually made available in the US, but sources indicate that it will finally arrive this April at B&H Photo (likely alongside this new version, which we won't see for at least a couple of months).

The SMC Pentax-DA 645 25mm F4 has just been listed in our lens database.  Once it becomes available, we will post an update on our homepage!